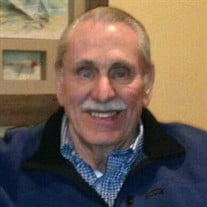 Alan Keith Simpkins Sr., 70, of Southampton, NJ, formerly of Cinnaminson, NJ passed on March 25, 2015. Beloved husband of JoAnn (nee Schilke) for 48 years. Loving father to Laurie and her husband Tim, and Alan Jr. Loving Poppy to Amanda and Shane. Born in Camden, NJ on February 22, 1945, Al was the son of the late Raymond Simpkins and Sarah Lindemuth, and stepson of the late Paul Lindemuth. He is survived by his brothers Raymond and Frederick Simpkins and sister Isabel Lindemuth Teplitz. Al was a graduate of Moorestown High School Class of 1963, where he was a varsity letter winner in multiple sports. He attended Fullerton Junior College in California after high school. Upon his return from California, Al and JoAnn were married and began their family in Riverton, NJ and were longtime residents of Rancocas Woods and Cinnaminson. He spent 28 years of his life working for Stroehmann Bakeries. To his friends and family he was known simply as "Big Al". Big Al enjoyed going to Philadelphia sporting events, concerts and casinos. He also could be found on soccer, softball, baseball and football sidelines rooting both his children and grandchildren on over the years. He also took great pleasure in spending time at the various beaches of the Jersey Shore and Atlantic Coast swimming in the ocean. He loved to ride the waves, float, and always had to have one last dip. Or, you could find him enjoying the simple pleasures in life at his home relaxing on his deck, reading the newspaper every day from front to back, taking a swim in his pool or attempting to start a roaring fire in his rec room. He was a member of the Fleetwood Sportsmen Association where he spent numerous hours playing softball, making many friends and hitting monstrous foul balls. He was also a member of the Moose Lodge where he would love to stop and visit at each local lodge during a road trip. As a father, Al lead by example. He was a dedicated, hard-working, selfless man who took great pride in raising his children. As stated by one of his former high school classmates and a life-long friend, "Al had the demeanor to always make you feel he genuinely cared about you, and he was always very interested in your well-being. And, yet he asked for nothing in return. I never once heard him complain about anything regardless of what was going on with his life whether it be working very long hours as a bread man, or later in life dealing with health issues. He was in the classic sense a survivor in this world which more people should emulate. It just was part of his persona to be upbeat and positive regardless of the situation. I will miss his very easy going attitude, his very quick smile, and his robust laugh. I will miss being his friend. Big Al truly was the most gracious, and no question in my mind, the nicest person that I have ever known. I am humbled to have been a friend of his." We invite you to share more thoughts, memories and photos to this site. Big Al was an amazing man and we would love to hear your stories. He will never be forgotten, and will live in our hearts and minds forever. We are all blessed to have had him for 70 years on this Earth. Funeral service Monday 10:30 am at the Lewis Funeral Home, 78 E. Main St. Moorestown, NJ. Visitation Monday 9:30- 10:30 am at the Funeral Home. Interment Lakeview memorial Park, Cinnaminson, NJ In lieu of flowers please make a donation to the American Heart Association or the Cinnaminson Township Parks and Recreation Youth Sports. May you Rest in Peace Daddy.

The family of Alan K Simpkins Sr. created this Life Tributes page to make it easy to share your memories.

Send flowers to the Simpkins family.