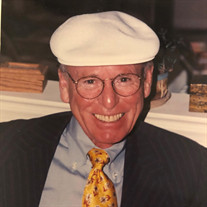 Alan Stanley, a former resident of Moorestown, New Jersey, and a more recent resident of San Diego’s Little Italy neighborhood, died of natural causes on Monday, February 25, at his home in San Diego, CA. He was 79. A veritable bon vivant of the many places he lived, most would recognize Alan as a friendly, funny, charming man in a blue blazer with a white towel wrapped like a scarf around his neck, proudly wearing a USS Carl Vinson Navy baseball cap in honor of his son’s 22 year Naval Aviator career. He loved chatting with every new person he met, making quick friends with locals and tourists alike and usually would offer to help them in any way he could. Alan William Stanley was born on June 1st, 1939, in the Queens Borough of New York City. His father, Leon, was an entrepreneur and businessman. His mother, Loretta, was a socialite and homemaker. Alan grew up in Queens and Valley Stream on Long Island, the second of four children along with his sister Carol, and brothers Stephen and Richard. Alan graduated from Valley Stream High School, where he enjoyed great athletic success as a wrestler under Long Island’s legendary National Wrestling Hall of Fame coach Harold Earl. Alan competed in the New York State Wrestling Championships, outmatched only by a young man who went on to wrestle in the 1960 Olympics. After a stint at Indiana University on a wrestling scholarship, Alan enlisted in the Army, along with his brother Stephen, attending basic training together at Fort Dix, New Jersey. He served in Germany at the height of the Cold War period, becoming a clerk and driver for an Intelligence Officer on maneuvers in the German countryside. Upon his discharge from the Army, Alan returned to New York, where he co-founded a men’s apparel retail store, Regal Slacks and a sister store, the Shirt Rack, along with his father and brother Stephen. They became early tenants in some of the first shopping malls in New York, Philadelphia, New Jersey, and Atlanta, Georgia. He soon moved to Philadelphia, then to Atlanta to manage the stores. Regal Slacks and The Shirt Rack became known for fashionable window displays of men’s wear, driven by Alan’s impeccable ability to create sharp outfits, matching stylish ties with shirts and slacks. A mentor and great friend to the many young men and women he hired to staff the stores, he taught them how to provide great customer service and close sales, skills that carried them to their own successes in life and business. In 1978, shortly after the passing of his father Leon, Alan closed his Atlanta store, turned over his part of the business to his brother, moved to Southern New Jersey and began a career selling insurance. Although he quickly rose to become the top-selling agent in his office, it didn’t appeal to him. He turned to real estate sales, becoming a Million Dollar Listing agent with Weichert Real Estate in Moorestown, NJ. Eschewing the cold winters of New Jersey, Alan returned to his roots in apparel, becoming a salesman in the men’s department of Saks Fifth Avenue in Fort Lauderdale, Florida. Finding Florida a bit too far from family, he moved close to his aunt and Uncle in Charleston, South Carolina. Entering a period of semi-retirement, he enjoyed the Carolina Low-Country lifestyle and balmy weather while running his own lemonade stand, selling horse carriage tours of Historic Charleston, and greeting thousands of guests as an iconic doorman of Charleston’s Planter’s Inn Hotel. On a 2010 trip to see his grandchildren in Los Angeles, Alan visited San Diego for the first time and decided immediately he wanted to live there. In less than a month, he had packed his belongings in Charleston and returned to San Diego. He has resided in the Little Italy neighborhood ever since. In 1965, Alan married Sandra D’Elia, whom he had met through mutual friends in Manhattan. They had four children together. The marriage ended in divorce in the 1980s. He is survived by his daughters and sons-in-law Cheryl and David Bosnak, Megan and Dave Conover, Kathleen and Mark Mower; son Jimmy Stanley; grandchildren Mason, Luca, Zeke, and Walker; sister Carol Anderson; brother and sister-in-law Richard and Lucia Stanley; and many cousins, nieces, and nephews. Visitation for family and friends will be held Tuesday, March 5th from 9:00am to 10:30 am at the Lewis Funeral Home, 78 East Main Street, Moorestown, New Jersey. Alan’s interment will follow at Colestown Cemetery in Cherry Hill, New Jersey. Condolences may be left at www.lewisfuneralhomemoorestown.com

The family of Alan W Stanley created this Life Tributes page to make it easy to share your memories.

Alan Stanley, a former resident of Moorestown, New Jersey, and...

Send flowers to the Stanley family.