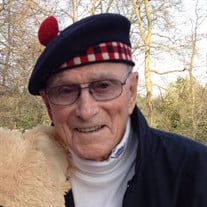 Albert V. Andreola, “Andy”, “Bert”, or “The Loveable Italian”, passed away peacefully in his sleep on Christmas morning at 101 years old. He was a beloved husband, father, and friend, an icon in South Jersey and Thunder Bay, Ontario golf circles and an avid Flyers fan, being an original Flyers ticket holder. He won 10 golf championships in 5 decades, played junior ice hockey in Canada, and professional ice hockey in the Netherlands. He served in the Canadian Army during WW II and was very proud of his perfect attendance at Rotary for nearly 50 years. He traveled the world as Captain of the US Senior Golf Team with his wife, Norina, where he got to showcase his facility with languages, including being fluent in Dutch and conversational in Japanese. He was known for the skip in his step and twinkle in his eye, his meticulous habits, and his affectionate nature. He is survived by his “child bride”, Norina (Gregnol) Andreola, to whom he was married for 43 years, his 6 children, Albert Andreola (Linda), Marsha Andreola, Saskia Ishii (Clyde), Robert Andreola (Janet), Kathy Mullin (James), and Sue Moonan (Mike); 16 grandchildren (Ryan, Allison, and Jenna, Allison, Melody, Katie-Jo, Kimberly, and Christopher, Sarah, Daniel, and Amy, Lindsey, Lauren, Bridget, and Michael, and Jason); 8 great grandchildren (Ashley, Emily, Connor, Brynn, Leo, Lily,Tavi, and Nalu); his devoted niece and caregiver, Jacquelyn Symonds; and the Bailey Family, Dan, Jo Anne, Caroline and Alison, and their dog, Andy. Visitation will be on Saturday January 4, from 9-10:30am, immediately followed by a funeral mass at St. Charles Borromeo Church, 2500 Branch Pike, Cinnaminson. The family asks that donations be made to the Ed Snider Youth Hockey Foundation, sniderhockey.org, 3601 S. Broad Street, Philadelphia, PA 19148.

The family of Albert V Andreola created this Life Tributes page to make it easy to share your memories.