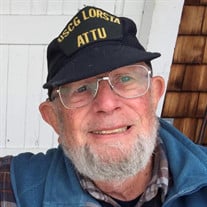 Alfred Tatem Driscoll (“T”), 85, of Moorestown, NJ, passed away on November 26th, 2021 surrounded by his wife and four children. Alfred T’s parents were former New Jersey Governor Alfred Eastlack Driscoll and Antoinette Ware Tatem Driscoll. He was born October 14th, 1936 in Philadelphia, Pennsylvania. He grew up in Haddonfield, NJ, graduated from Moorestown Friends School, and later University of Maine (Orono), where he majored in Engineering/Physics and minored in Electrical Engineering. In 1960, he joined the US Air Force. He served on numerous bases around the world, including in Thailand, Vietnam, Germany, Spain, and Alaska as an aircraft maintenance officer and finally squadron commander. One of his favorite assignments during his time in the Air Force involved accident investigation of aircraft bird strikes. He retired in 1982 with the rank of Lieutenant Colonel. After retiring from the Air Force, Alfred T. spent a portion of each year working with a birding tour group on Attu, a remote Aleutian island, and helped make it possible for the birders to stay in the very primitive facilities of the former military outpost. An avid birder with an impressive life list, he travelled extensively throughout North America in search of rare birds. He served as the president of the San Bernardino, CA Audubon Society, was active in the Fort Walton Beach, FL Area Audubon Society, and later, the Delaware Valley Ornithological Club. He participated in the annual hawk-banding in Cape May, NJ for many years, as well as other birding and conservation efforts. Although passionate about adding rare birds to his life list, the lifelong friends he made along the way were even more significant to him. He also enjoyed assisting his wife, Ann, and the Moorestown Garden Club, by building structures for the club’s entries in the Philadelphia Flower Show. Though Alfred T’s career took him all over the world, he returned each summer to his family’s rustic summer retreat in central Maine. His childhood experiences and escapades at the lake in Maine, especially with his cousins, were larger than life and shaped his future decisions and paths. Always an innovative problem solver, he was passionate about maintaining and improving the buildings and grounds of “The Boulders” as well as teaching his children and grandchildren to do the same to ensure that it would be well cared for and enjoyed by generations to come. Long before solar power was common, Alfred T. invented his own “solar system” for the camp along with a “water works” (pumping, filtration, and plumbing system); he devoted countless hours to making the camp efficient and comfortable for all. Alfred T. and Ann hosted the many friends they had made throughout their years in the military and through their hobbies, and thoroughly enjoyed spending time with the friends made locally, their immediate family and generations of extended family, including his cousins, nieces, and nephews. He was also active as president of the lake’s community association for many years. Alfred T. is survived by his wife of 61 years, Ann Theresa Hodum Driscoll, his brother, Peter Eastlack Driscoll, his brother-in-law, Charles Norman Hodum, and was predeceased by his sister, Patricia Ware Driscoll. He is also survived by his four children: Alfred Austin Driscoll, his wife Haley Coles Driscoll, and their sons Alfred Coles Driscoll and Robie McCammon Driscoll; Theresa Ann Driscoll Callahan, her husband Steven Xavier Callahan, and their children Savannah Driscoll Carole and Samuel Austin Martin, and Theresa’s stepson Christopher Howell Martin; Suzanne Maria Driscoll, her partner, H. Royer Smith, her children, Sophia Driscoll Gamber, Olivia Driscoll Gamber, and Elijah Driscoll Gamber, and their father David Edward Gamber; Amy Driscoll Weinberger, her husband Keating James Weinberger, their children: Nicole Marie Faries, her husband William Faries, and their son William (Liam) Faries; Jessica Antoinette Bourne, her husband Mark Jude Bourne Sr., and their children, Isalina Ann Bourne and Mark Jahmal Bourne Jr.; Thomas Peter Pilatsky II; Joshua Alexei Pilatsky; and Kyle Joon Weinberger. Out of concern and care for the health and safety of all who wish to gather to celebrate Alfred T’s life, the family is tentatively planning memorial services for late spring in New Jersey, and during the summer in Maine. Plans will be announced as they are made.