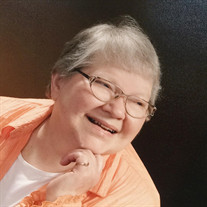 Alice S. Winering, (nee Smith) passed away on June 29, 2017 at the age 81, a resident of Willingboro, NJ. Alice retired from Rancocas Valley Hospital in Willingboro where she worked as an RN for over 20 years. She will be remembered as a beloved Wife, Mother, Sister, Grandmother, Great Grandmother and Nurse, and as a sweet and caring person by everyone that knew her. Wife of the late Joseph William Winering. Mother of Kathy (Curt) Diehl, Karen Winering and Keith (Bridget) Winering. Sister of Carolyn (Mike) Mace, Richard Smith and the late Don Smith. Grandmother of Grace & Sarah Diehl, Alicia (Dan) Riley and Morgan, Justin, Jack and Kimmy Winering. Great Grandmother of Daniel, Madelynn and Evelyn Riley. Alice was born in Laughlintown, PA and grew up in the Ligonier Valley area. She attended The Valley School and Ligonier High School and went on to complete nurses training at Temple University in Philadelphia, PA. Alice married Joe Winering of Philadelphia in 1959 and they raised three children there until they moved to Willingboro, NJ in 1969. Once settled in Willing-boro Joe continued to work for the Frankford Arsenal and Alice began working nights at Ranco-cas Valley Hospital, where she stayed during the many ownership transitions the hospital experi-enced over the years. Close to the end of her career, she worked with cancer patients and new mothers. Alice loved and served at Saint Paul United Methodist Church in Willingboro where she partici-pated in the JOY Circle and United Methodist Women. She was a Girl Scout Leader for many years and enjoyed cake decorating for weddings and other celebrations in the family. Alice and her family centered vacations around her extended Smith family reunions, that took place every two years, visiting locations all over the country. Over the last several years Alice began taking in pets that needed a home, often in their later years. This was just one of the many causes that she supported throughout her life. Known for her calm presence, caring smile, and generous nature, Alice’s memory will be cherished by all those she touched during her lifetime. Funeral services will be held Monday July 10, 2017 at Saint Paul United Methodist Church, 201 Levitt Parkway, Willingboro, NJ 08046. Visitation will be at 10 am, followed by the Service at 11 am at the Church. Internment will take place at Colestown Cemetery, Cherry Hill, NJ. Please no flowers. Memorial contributions to one of Alice’s passions may be made to St. Paul United Methodist Church, Burlington County Animal Shelter, 35 Academy Drive, Westampton, NJ 08060, or the Western Pennsylvania Conservancy, 800 Waterfront Drive, Pittsburg, PA 15222.

Alice S. Winering, (nee Smith) passed away on June 29, 2017 at the age 81, a resident of Willingboro, NJ. Alice retired from Rancocas Valley Hospital in Willingboro where she worked as an RN for over 20 years. She will be remembered as a... View Obituary & Service Information

The family of Alice S Winering created this Life Tributes page to make it easy to share your memories.

Send flowers to the Winering family.