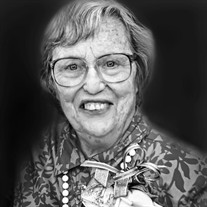 Anne Chase LeDuc, born June 15, 1925 died October 3, 2020. She was preceded in death by her parents, Louis Bronson LeDuc and Bessie Daniel Catlett LeDuc and her brother, Louis Bronson LeDuc, Jr. On her maternal side, Anne was the descendent of one of our nation’s founders, Patrick Henry and on her paternal side her LeDuc forebearers were early settlers of Minnesota including one who was a Union general in the Civil War. Born in Philadelphia, PA, Anne enjoyed a storybook childhood. She attended Haddonfield Friends School where she excelled in sports from an early age. At age five, she was the only girl on the baseball team and by her own admission, “probably better than all the boys.” In 1937, Anne’s family moved to Moorestown where she attended Moorestown Friends School, graduating in 1943. Anne lived several places early in her career but eventually moved back to her childhood home where she continued to live until her death. It was during high school that Anne first experienced the Tegawitha field hockey camp in Tobyhanna, PA. The legendary Constance Applebee, credited with bringing field hockey to the US, ran the camp and became a life-long mentor and friend to Anne. Anne received an athletic scholarship (a rarity at the time) to Rollins College in Winter Park, FL from which she graduated in 1947 with a BA in Psychology and Education and later received an MA in Philosophy and Social Science from Columbia University Teachers’ College. During these years she moved her focus from tennis to field hockey and earned a spot on the US Touring Team traveling to South Africa, Britain, Australia and the Fiji Islands. After college, Anne coached in Baltimore, MD and Montclair, NJ before settling into an extended career at George School, Newtown, PA where she coached swimming, lacrosse, basketball and field hockey from 1962 to 1993. Before starting at George School, Anne worked in New York City for the Multiple Sclerosis Society first as field director and later as Director, the only woman at that time who was head of a major non-profit. At George School, Anne coached hockey, swimming and lacrosse in addition to being a dorm parent. She became Girls’ Athletic Director, supervising numerous coaches, while also coaching varsity field hockey, lacrosse and a basketball team that won the Friends Schools League Championship in 1987. As one of the founding members of the Friends School League, Anne dreamed of a league made up of like-minded schools and with equal opportunities for female athletes. Today the turf field bears the name Couger Field and honors Anne and other long-time coaches. Upon retirement, Anne was able to pour all her resources into saving her beloved Chalfonte Hotel in Cape May, NJ. from the wrecking ball. Anne remembers playing on the porch of the Grand Ole Dame at age two. She loved the hotel for more than half of its 200 years. “The Chalfonte is one of the true loves of my life,” Anne said, “More than a commercial hotel, more than a state of mind, it is about feeling, and people and recreating. The Chalfonte is a wonderful supportive and caring community. It is my second home!” Anne, along with fellow George School teacher, Judy Bartella, helped the Satterfield Family manage the Chalfonte and then purchased the hotel in 1982. Anne and Judy developed work weekends in conjunction with the University of Pennsylvania and University of Maryland, allowing much needed work to be done by architectural students for credit. Anne nursed the hotel through decades of renovation, preservation and good times. As driven and competitive as Anne was, she was also humorous. Those who knew and loved her are imagining her singing the infamous “Prunie Song” right now. We would like to give special thanks to Anne’s caregivers in her final years, Delia Mercene and Amamatu Halieu, Elizabeth Berbette, her Care manager and Chris Forward, her Nurse Practitioner. Anne leaves behind her goddaughters, Mary Hughes Reid and Susan Sullivan, Amanda Sullivan, her business partner and friend, Judy Bartella and friends too numerous to count. A quote from The Chalfonte, a book by Karen Fox, “There are horse whisperers and dog whisperers, Anne is a people whisperer.” A Memorial Page has been set up at www.gatheringus.com/AnneLeDuc for friends to write memories of Anne. A Virtual Service will be held on Thursday, October 15 at 5 PM at the same site. The zoom link will be sent by invitation. If you are interested in receiving an invitation to the service please email [email protected] Anne’s ashes will be interred in the garden at Trinity Episcopal Church, Moorestown, NJ where she was a long-time member. Anne was a very generous philanthropist contributing over many years to numerous, charities especially those related to animals. In lieu of flowers contributions may be made to the World Wide Fund for Nature (formerly World Wildlife Fund) at wwf.panda.org or another animal charity in her memory.

The family of Anne Chase LeDuc created this Life Tributes page to make it easy to share your memories.

Send flowers to the LeDuc family.