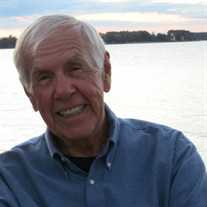 Arthur Clinton Miller, Sr., a longtime resident of Moorestown, N.J., passed away on July 26,2019 at age 87 after a long illness. Born in Atlantic City, N.J. in 1931, to Rebecca May Linblad Miller (nee Adams) and Arthur Clinton Miller. Growing up at the shore, Art developed a love of the water and boats, but knowing his artistic career would not develop in Atlantic City, at the age of 19 he married and moved to Philadelphia. There he pursued a career in illustration, industrial design and later graphic arts. Art was dedicated to the security of his country through his work for several defense contractors including RCA, which later became Lockheed Martin. He retired in 1997 as Manager of the Presentation Services Department. During his career with RCA he spent two separate tours living and working on the Kwajalein Atoll. Art returned to RCA in Moorestown where he met his loving wife of 41 years, Ellen Tyler. Never wanting to sit still in retirement, Art pursued “fun” jobs in commercial sign making and as a courtesy driver for Ed Eberts Auto Repair in Moorestown. Art’s motto was if he couldn’t get people laughing in two minutes he wasn’t doing his job. Always keeping busy, Art followed his enjoyment of the water and boats by volunteering in the Coast Guard Auxiliary for over 22 years. His favorite duty was patrolling on the Delaware River in his boat “Miller Time”. During his tenure in the auxiliary, Art served as Assistant District Staff Officer for Marine Dealer Visits, Vice Division Commander, Flotilla Commander, Coxswain, and an instructor. Art will always be remembered for his sense of humor, and never treating anyone as a stranger. He would talk with anyone, anywhere, about anything. Art is survived by his wife, Ellen Tyler Miller, his sons, Arthur Clinton. Miller, Jr. (Victoria), Paul Douglas Miller (Elaine), Timothy Mark Miller, Zachary Tyler Miller, his granddaughter, Candice Elizabeth Miller, and cousin Robert William Anderson. Art was preceded in death by his brother Broer Linblad. A memorial service will be held at the Mt. Laurel Friends Meeting House, 436 Mt. Laurel Rd, Mt Laurel Township, NJ 08054 at 4 pm on Thursday , Aug. 22, 1019. Interment will be private. In lieu of flowers, donations may be made to Patient Access Network Foundation, P.O. Box 76408, Baltimore, MD 21275-6408. (866-316-7263). https://panfoundation.org/index.php/en/donors/ways-to-give The Pan Foundation offers nearly 70 disease specific assistance programs.

The family of Arthur C Miller Sr. created this Life Tributes page to make it easy to share your memories.

Send flowers to the Miller family.