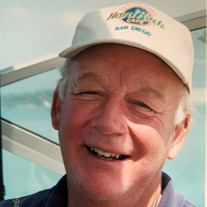 Asa Matlack Stackhouse III of Moorestown, NJ passed away September 27, 2019. He was born in Philadelphia in 1939, grew up in Moorestown and attended Moorestown Friends School, graduating in 1957. He studied mechanical engineering at Cornell University where became a member of Sigma Alpha Epsilon Fraternity. He joined the Air Force in 1961, serving over twenty years including tours in Viet Nam. As a pilot, he loved flying C-130 transport planes. He received multiple service awards, including the Distinguished Flying Cross. While in the Air Force he earned his MBA from the University of West Florida in 1982. He retired from the Air Force in 1984. After retiring he worked for Southern Air Transport for ten years. He flew transport aircraft on humanitarian relief missions around the world. He retired from flying in 1994. Continuing his service to his country, he was proud to work for FEMA for almost 20 years. He assisted in a number of disaster relief efforts including 9/11, Hurricane Katrina, and Super Storm Sandy. His many interests were automobiles, flying, travel, reading, diving, family history, and maintaining lifelong friendships. In his later years he came back to his beloved home town of Moorestown NJ. He is survived by his son, Edwin Asa Stackhouse of Biloxi MS, his brother, Dr. Thomas W Stackhouse of Falmouth MA, his cousin, Arthur J Collins III of Moorestown and many nieces, nephews, cousins and other family. A memorial service for Asa will be held at Moorestown Friends Meeting 118 E Main Street on Saturday, November 9, at 2:00 pm. In lieu of flowers, donations can be made to: Moorestown Friends Meeting or the Historical Society of Moorestown, P.O. Box 477, Moorestown, NJ 08057.

Asa Matlack Stackhouse III of Moorestown, NJ passed away September 27, 2019. He was born in Philadelphia in 1939, grew up in Moorestown and attended Moorestown Friends School, graduating in 1957. He studied mechanical engineering at Cornell... View Obituary & Service Information

The family of Asa Matlack Stackhouse III created this Life Tributes page to make it easy to share your memories.

Send flowers to the Stackhouse family.