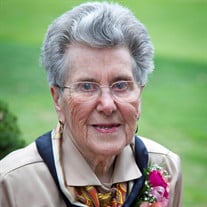 Aurelia Caterina Maresca Bender, 93, of Moorestown, NJ, daughter of the late Vincent and Clelia Bandini Maresca, sister of the late Grace Mannillo and the late Vincent Maresca and beloved wife of the late Honorable Henry J. Bender on December 18. She is survived by her 10 devoted children and their families, Henry V. Bender, Ph.D. of Moorestown, NJ; Thomas and Janet Bender of New Monmouth, NJ; Mary and Howard Hoffman of Hamilton, NJ; Robert and Deborah Bender of Philadelphia, PA; Stephen Bender, D.C. and Kathy Manley, D.C. of Ashland, OR; Paul and Karen Bender of Bel Air, MD; Mark and Lorraine Bender of Yardley, PA; Peter and Julie Bender of Moorestown, NJ; Philip Bender and Amy Knight-Bender, M.D. of Catonsville, MD; Ann and Jim Bruggeworth of Haymarket, VA; 21 grandchildren and 6 great grandchildren. Born and raised in the Queensboro Hill section of Flushing, NY, Aurelia graduated from Newtown High School, Queens, NY in 1938. Fluent in Italian, her parents’ native tongue, she was proud of her Italian heritage. A dedicated piano student, at the age of 14 she received a gold medal in a regional competition sponsored by the Music Education League of New York City where she performed at Carnegie Hall. She graduated from Barnard College, NY in 1942 and earned her Masters in Music Education from Teachers College, Columbia University, NY in 1943. Aurelia was a theater accompanist at Smith College, Northampton, MA until her marriage to Henry J. Bender of Union Hill, NJ in May, 1944. They settled in Leonia, NJ where five of their ten children were born. In 1953, they moved to Moorestown, NJ and added five more children to the family. A devoted, loving and loyal wife, Aurelia had her tenth child at the age of 45. Six years later, she tragically lost her husband of 29 years and found herself a single mother with five children still at home. Strengthened by her strong character and her deep faith, she guided and nurtured her children with the selfless love that defined her entire life. A natural poise and grace stemmed from her sincerity which was her inner strength. She saw the good in everyone she met and found beauty in the simplest things. Her gentle and loving kindness was there for anyone who needed it and she was an inspiration to all even through her final days. A gifted classical pianist and teacher, she generously shared her musical talents with the Moorestown community for over 50 years by volunteering, performing and teaching private lessons in her home to pianists both young and old, many of whom stayed in close touch with her over the years. In 1967 she co-founded the South Jersey Music Teachers Association which thrives to this day. She shared and instilled her love of classical piano with hundreds of students and fellow teachers who benefited from the same warmth and sincerity extended to her own children. A lifelong student, she continued to hone her knowledge and skills by taking courses in piano theory at Temple University and even attended a symposium in Italy when she was 76. Her professionalism and knowledge launched many of her younger students into college scholarships and professional careers. Thriving on her endless desire to give, she regularly shared her musical gift with family members, fellow residents and staff of Grace Assisted Living in Moorestown by performing on her beloved Bechstein piano which has been donated by the family in her name to the Perkins Center for the Arts in Moorestown. Aurelia will live on as a shining example of the true meaning of selflessness. She will continue to inspire and enrich all those who knew her. May she rest in peace. Family and friends are welcome for visitation at Lewis Funeral Home, 78 East Main Street, Moorestown, NJ on Tuesday, December 23rd from 10:00 AM to 12 Noon. A funeral Mass will be celebrated at Our Lady of Good Counsel Church, 42 West Main Street, Moorestown, NJ at 12:30 PM. Interment will follow at Mount Carmel Cemetery in Moorestown. In lieu of flowers, the family suggests that memorial contributions be made to the South Jersey Music Teachers Association, Attention: Elvira Kipnis, 1653 Blue Jay Lane, Cherry Hill, NJ 08003

The family of Aurelia Bender created this Life Tributes page to make it easy to share your memories.

Send flowers to the Bender family.