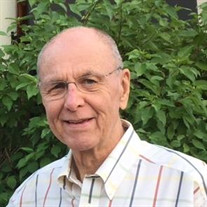 Baird Colville Foster , Jr., 77, on August 7, 2016 from head injuries sustained in a fall. Baird, of Moorestown, NJ, was the son of Baird C. Foster Sr. and Roberta (nee Hoffbauer). Beloved husband of 56 years to high school classmate Margo (nee Milling). Loving father to son Kyler Brooks Foster (Kimberly) of Moorestown and their children, Brooks Stevenson and Morgan Victoria; and to son Preston Cook Foster of Haddonfield and his twin sons, Adam Thomas and Samuel Baird. Brother to Richard E. (Phyllis) of Blackwood and Lawrie J. of Chestnut Hill, PA. Baird was the great-great nephew and great-nephew of David Baird Sr. and Jr., respectively, both US Senators from NJ in the early 1900s. Baird Boulevard in Camden was named for David Baird Sr. Baird grew up in Haddonfield, NJ and loved classical music. He was a percussionist at Haddonfield Memorial High School and helped to pay his way through Rutgers University in New Brunswick, NJ by playing drums in various bands. Upon graduation in 1960, Baird began employment at the family business, International Envelope Company in Philadelphia. Later he was involved in sales in the publishing industry at Lehigh/Rocappi in Pennsauken, NJ; and Auto-Graphics in Pomona, CA, from which he retired in 1995. Soon after, he bought a 1962 Austin-Healey BJ7 convertible and became an enthusiastic and active member of the Austin-Healey Club of America, the Austin-Healey Sports & Touring Club, and the Healey Drivers Club (UK), receiving numerous service awards and recognitions from those clubs over the years. The highlights of his Healey ownership occurred in 2000 and 2010 when he chauffeured Jenson Button (2009 Formula 1 World Champion) in the Parade des Pilotes (Drivers Parade) at the Formula 1 Grand Prix du Canada, Circuit Gilles Villeneuve, in Montreal. Contributions in Baird’s memory may be made to the Donald M. Healey Memorial Fund, c/o Beverly Sealand, 15 Ancient Hwy, Wethersfield, CT 06109-3929. The fund provides scholarships in the USA and England to students pursuing studies in the automotive field. Following Baird’s wishes, funeral services were private.

The family of Baird C Foster created this Life Tributes page to make it easy to share your memories.

Send flowers to the Foster family.