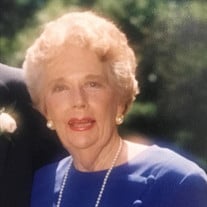 Not sure what to send?

Ritter, Barbara Jean (Still) of Medford, NJ, aged 93, passed away on May 5th, 2022. Barbara was the beloved wife of R. Kenneth Ritter (deceased), mother of Marcia Ritter Doiron (Bill), Thomas Kenneth Ritter (Lisa), Robert Steven Ritter (Holly), Ann Ritter Wilson (Greg). Barb was also the proud grandmother of Bill and Mike (Meghann) Doiron, Kyle and Becky Ritter (Mike Foster), Kristin Rohlfing (Duncan) and Amanda Ritter, MacLean and Emma Wilson. She was also great-grandmother to Will and Caroline Doiron, Noelle, Emma and Logan Doiron, and Duncan Jr. and Piper Rohlfing. Barb was born in Boston, Massachusetts on May 23rd, 1928 and lived in Needham, Massachusetts until she was seven years old when she moved to Pennsylvania with her older brother, Bing, and her parents, Harold and Ethel. Barb and Ken married in 1951 and raised their four children in Moorestown, where they resided for forty years. Barb attended Colby Sawyer College in New Hampshire and worked at First Pennsylvania Bank before her marriage. She also loved gardening, bridge, golf and her Church. Barb was a member of the Moorestown Garden Club, the Nine Holers at the the Moorestown Field Club and a congregant at the First Presbyterian Church of Moorestown. As a Church member, she assisted with many weddings, organized Sunday flower deliveries and coordinated Church luncheons. Barb worked at Moorestown High School for many years in the Guidance Department. As students began to think about attending college, Barb assisted many with the application process. Barb would say that her greatest accomplishment was her family. A supporting and loving mother and wife, she encouraged the goals and dreams of her children. Barb also spent summers on Cape Cod in her beloved Barnstable with her aunts, uncles, cousins and many nieces and nephews. A graveside service will be held at First Presbyterian Church of Moorestown on Thursday, May 26th at 11:00 am. Donations in Barb’s name may be made to Medford Leas Barton Arboretum, 1 Medford Leas Way, Medford, New Jersey.

Send flowers to the Ritter family.