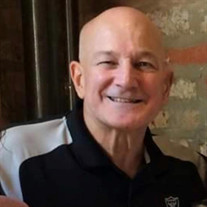 Basil Anton Kuzio, Sr., age 67, of Moorestown, NJ died on Monday, May 4, 2020 at home surrounded by loved ones after a 9 year battle with brain cancer. A hardworking family man, a respected leader, a lifelong learner, and a dedicated volunteer, Basil had many interests and accomplishments in life. Born on May 9, 1952 in Bridgeport, CT, the son of Basil and Sigmunde (Kaindl) Kuzio. Basil attended St. John Nepomucene School, Bridgeport, CT. He was a proud graduate of Kolbe High School, Class of 1970, and continued his education at Villanova University (BA, 1974) and at Union College (MBA, 1988). The majority of Basil’s career was spent at Travelers Insurance (where, by all accounts, he was the best boss) and, for the past 24 years, as a Financial Advisor with Ameriprise. Basil married Janet E. (Hartnett) on October 11, 1975 and together they raised six children. His pride and joy, he never missed a chance to boast about his family, especially as college degrees were earned and as the family grew with loving spouses and grandchildren. His cultural heritage was a big part of his identity and Basil was actively involved in several Ukrainian organizations, including: Plast Ukrainian Scouting Org, Ukrainian Engineers, and the Ukrainian Educational and Cultural Center in Jenkintown, PA. Basil had a gift for staying in touch with people from throughout his life, including old classmates, coworkers, and neighbors. The annual UConn basketball get-together with his good Kolbe Men stands out as an event he looked forward to every year. He established and led the Kolbe Cathedral High School Alumni Association, traveling to Connecticut often for board meetings and to support high school events. Basil excelled on the football field as a young man playing with the semi-professional Upper Darby Sharks and later took to the basketball court with a striped shirt and whistle. A member of IAABO Camden Board 34 Basketball Officials for the past 25 years, he worked hard to earn his place calling college games with ECAC and NJAC. His referee skills didn’t stop with basketball - Basil happily spent many hours reffing at the Moorestown Youth Flag Football League. A lifelong athlete and sports fanatic, Basil ran an epic March Madness Bracket pool for over 30 years. He loved the NY Yankees, the Oakland Raiders and his Villanova Wildcats. In recent years, he enjoyed attending Exit 4 Boot Camp and took great pride in winning the attendance award more than once. Basil is survived by Janet, his wife of 44 years, and his children: Alexandra M. Wilson (Jesse), Katherine C. Vemis (Gregory), Natalie R. Trumbo (Andrew), Basil A. Kuzio, Jr. (Erika), Roxanne S. Schmid (Karl), and Lawrence A. Kuzio. And by his 9 grandchildren: Emmaline M., Amelia E., Gwenolyn H., Penelope C., Duncan A., Basil A. III, Sloane I., Walter B., K. Parker, and one on the way. Predeceased by his parents and his brother Andrew G., Basil is also survived by 3 brothers, Johann Oberwallner, Michael J., and Walter F., several brothers- and sisters-in-law, and countless nieces and nephews. Due to the requirements of social distancing, there will be a private burial. A Celebration of Life will be held at a later date. In lieu of flowers, contributions in Basil’s name may be made to one of the many causes he supported: Kolbe Cathedral High School in Bridgeport, CT or PLAST Ukrainian Scouting Organization - 700 Cedar Road, Jenkintown, PA 19046.

Basil Anton Kuzio, Sr., age 67, of Moorestown, NJ died on Monday, May 4, 2020 at home surrounded by loved ones after a 9 year battle with brain cancer. A hardworking family man, a respected leader, a lifelong learner, and a dedicated volunteer,... View Obituary & Service Information

The family of Basil Kuzio Sr. created this Life Tributes page to make it easy to share your memories.

Send flowers to the Kuzio family.