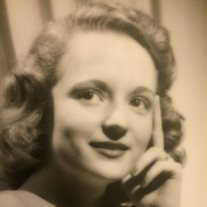 Bette Mengel Reinhold passed away peacefully at the age of 85 at The Evergreens in Moorestown, NJ, on Friday, March 14, 2014 following a brief illness. She was the wife of Donald F. Reinhold for 65 years. She is survived by her husband, her three children – Donald, Jr. (Pat) of Wichita, KS; Roger (Anne) of Dexter, MI; and Marlise Bickel (Robert) of Moorestown, NJ; her three grandchildren – Rebecca Reinhold of San Francisco, CA, Allison and Mollie Bickel of Washington, DC, and her sister, Carol Mengel, of Sun City West, AZ. She was preceded in death by her sister, Jean Mengel. Bette, the daughter of Beulah and Clarence Mengel, was born in Reading, PA. The family moved to the adjoining community of South Temple early in her life. She enjoyed a happy childhood and studied the accordion. Upon graduation from Muhlenberg Township High School, she attended the nursing school program at the Reading Hospital. A vivacious, red-haired, young woman of beauty and a quick wit, she caught the eye of Donald Reinhold, also of South Temple, who was a young 23-old Army veteran of World War II and about to enter the doctoral chemistry program at Rutgers University. It was on the swing sets during a Sunday school picnic to Kutztown, PA, where the sparks first flew between Bette and Don. They were married on December 18, 1948 at the South Temple Lutheran Church, and began their life together in the graduate student housing of Rutgers University. Bette worked at the University’s admissions department. Their first child, Donald Jr., was born and the young family moved into an apartment in Metuchen, NJ, where the second child, Roger, joined the family. Later the family moved to North Plainfield where daughter Marlise was born. Throughout most of the 1950s and throughout the 60s, the Reinhold Family was typical of many middle class families of the day. With Don becoming a senior research scientist for Merck, Sharp, and Dohme, Bette stayed home with the kids. Life was never dull as Bette immersed herself in the lives of her children actively participating in Cub Scouts, Brownies, school and swim club activities. She was also active at the Plainfield United Church of Christ. There was constant planning of summer vacations, trips to the Jersey Shore, and the memorable holiday dinners with family. Bette was an outstanding chef as friends and family will attest. She was a life-long recipe clipper, even well past the time when she was actively cooking and baking. As her children began leaving for college, Bette became more active in the workforce by teaching at nursery schools in Plainfield and South Plainfield. In 1979, Bette and Don moved into a home they had built in Morganville, NJ, which brought Bette closer to her beloved Jersey Shore, and her favorite spot at Avon–by-the-Sea. As retirement years began, Bette, always an avid reader with a love of learning, took classes at Brookdale Community College, where she also worked part-time for several years. She and Don frequently attended concerts in the area and often went into New York City where they enjoyed Broadway shows, the Metropolitan Opera, and the New York Philharmonic. There were several trips to Europe including ones to visit their son, Don, studying piano at the Salzburg Mozarteum, a river cruise down the Rhine River, a visit to the Dalmation Coast of the former Yugoslavia, as well as a memorable trip to Turkey. For many years, Bette and Don escaped the cold New Jersey winters by relaxing in the sunshine on Hilton Head Island. Bette loved her time here, walking along the beach, attending the local playhouse, entertaining friends and family, and sitting in the rockers along the edge of the harbor. As age began to catch up with them, Bette and Don moved to the Seabrook retirement community in Tinton Falls, NJ, in 2004, followed by a move to The Evergreens retirement community in Moorestown in 2012. If one could choose a single word to be associated with Bette it would be “family.” Family mattered most of all, and Bette was deeply devoted to all of us. She was always interested in the activities of Don, her children and grandchildren, and spoke about all with tremendous pride. As the miles started to come between us and visits were less frequent she stayed in touch by phone and letters. She traveled as long as she could, always to see one of her kids, or the graduations of a granddaughter. She never lacked for an encouraging word, laughed easily, and loved deeply. She made friends easily, and stayed in touch with many throughout her life. In a world where a smile goes a long way, Bette always had one, and all of us, friends, family, and even strangers are better for those caring moments. A memorial service will be held at the Holmdel Community United Church of Christ on Saturday, May 10 at 11am. Memorial contributions may be made to an art or musical organization of your choice.

Bette Mengel Reinhold passed away peacefully at the age of 85 at The Evergreens in Moorestown, NJ, on Friday, March 14, 2014 following a brief illness. She was the wife of Donald F. Reinhold for 65 years. She is survived by her husband, her... View Obituary & Service Information

The family of Bette M Reinhold created this Life Tributes page to make it easy to share your memories.

Bette Mengel Reinhold passed away peacefully at the age of 85...

Send flowers to the Reinhold family.