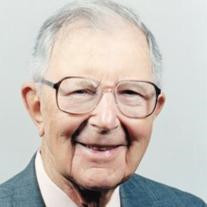 BLAINE EMERSON CAPEHART of Moorestown, New Jersey died on June 23, 2012 at the age of one hundred and four. He was predeceased by his wife, Elinore Hall Capehart who died in 1999. He is survived by his two daughters, Stacy H. Capehart of Burlington Township, NJ and Gretchen C. DeCou (Richard) of Moorestown NJ. He adored his six grandsons: Blaine R. Bevis (Susanne) of Düsseldorf, Germany, Daniel C. Bevis of Conshohocken Pa. and Joseph C. Bevis (Veronica) of Burlington Twp. NJ, David C. DeCou of Richmond VA, Christopher C. DeCou of Mechanicsville VA and Miller C. DeCou of Riverton, NJ. He has five great granddaughters. Mr. Capehart was a member of the third oldest law firm in New Jersey, now known as Capehart Scatchard, Mount Laurel NJ. After graduating from Dickinson College, he attended Harvard Law School and completed his law degree in 1934 at Temple University Law School at night during the Great Depression. On October 1, 1930, he clerked for the law firm of French Richards and Bradley which he later joined. Mr. Capehart continued to practice law well into his 90s and came to the office until after his 100th birthday, when he stopped driving. During his eighty years with the firm, it grew from four lawyers to more than seventy. During his legal career, Mr. Capehart was a member of the American College of Trial Lawyers, The National Association of Railroad Trial Council, The American Bar Foundation and the American, New Jersey, Burlington County and Camden County Bar Associations. His individual practice included litigation, railroad, labor law, worker’s compensation, real estate, corporation’s estates and trusts. Currently attorneys tend to specialize in only one area of the law. He served on the New Jersey Supreme Court Advisory Committee for Professional Ethics from 1973 to 1993 and was named Professional Lawyer of the Year in 2002. Mr. Capehart was born in Philadelphia PA and moved to Pennsauken when he was eight years old. After his marriage, he lived in Riverton, NJ until moving to Moorestown in 1969. He was a devoted golfer and was a member of the Riverton Country Club, The Moorestown Field Club and the Pine Valley Golf Club. He continued to play golf into his nineties. He loved to travel and loved raising flowers, especially amaryllises. The time he spent with his gang of grandsons was most special to him. Memorial service 2: 30 pm Thurs. at the First United Methodist Church, Pleasant Valley and Camden Ave. Moorestown, NJ. Private interment Springfield Cemetery, Springfield, NJ. Memorial contributions to First United Methodist. Church. or Lighthouse Hospice, 1040 N. Kings highway Suite 100 Cherry Hill, NJ 08034. Arrangements by Lewis Funeral Home, Moorestown, NJ

BLAINE EMERSON CAPEHART of Moorestown, New Jersey died on June 23, 2012 at the age of one hundred and four. He was predeceased by his wife, Elinore Hall Capehart who died in 1999. He is survived by his two daughters, Stacy H. Capehart of Burlington... View Obituary & Service Information

The family of Blaine E Capehart created this Life Tributes page to make it easy to share your memories.

Send flowers to the Capehart family.