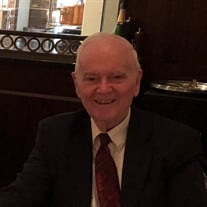 C. Harry Knowles Inventor, entrepreneur and philanthropist, C. Harry Knowles, 91, of Medford, NJ, died January 7, 2020, leaving behind a legacy of improved lives via the technology he created, the jobs he provided, the teachers and students he inspired and through nurturing his family and a wide circle of friends. He was born August 15, 1928 in Birmingham, AL where he lived until he attended Auburn University in 1944. After a 2-year period in the Marine Corps from 1946-1948 he returned to Auburn from which he received a bachelor’s degree in physics in 1951. He was then granted a master’s degree in physics from Vanderbilt University in 1953, following which he joined Bell Laboratories in New Jersey at a time when there was an explosion of technological developments enabled by the invention of the transistor. His seminal work on germanium transistors contributed greatly to Project Vanguard. He continued this work at Motorola in 1958 and then at Westinghouse from 1962 to 1968. He established his own company, Metrologic, in Blackwood, NJ in 1968 to develop laser technology for bar codes. His inventions ushered in use of handheld scanners including the triggerless, omnidirectional and mini-slot scanner. He held roughly 400 US patents in transistors, lasers and bar code scanning technology. Dr. Knowles was the recipient of many honors, including induction into the New Jersey Business Hall of Fame, inventor and entrepreneur of the year awards and two presidential “E” and “E Star” awards for export success. In 2006 the College of Sciences and Mathematics of Auburn University conferred a Distinguished Alumnus Award and a Lifetime Achievement Award in 2007. In 2008 Auburn University’s highest recognition, an honorary doctorate, was bestowed on him He is survived by his wife, noted pediatric neuropathologist, Dr. Lucy Rorke-Adams, three children, Harry Holmes Knowles, II, of BURLINGTON, Vt, Robert Knowles, of Alexandria, VA and Marjorie Knowles of Asheville, NC. Other survivors include a brother, William PENN of Birmingham, AL, a sister-in-law, Ruth Ramsey, also of Birmingham, several nieces and nephews and other extended family members. A Memorial Service will be held at The First Presbyterian Church, 101 Bridgeboro Rd, Moorestown, NJ at 11 AM on January 18, 2020. In lieu of flowers contributions may be made to: Music Fund of The First Presbyterian Church 101 Bridgeboro Road Moorestown, NJ NJ 08057

C. Harry Knowles Inventor, entrepreneur and philanthropist, C. Harry Knowles, 91, of Medford, NJ, died January 7, 2020, leaving behind a legacy of improved lives via the technology he created, the jobs he provided, the teachers and students... View Obituary & Service Information

The family of C. Harry Knowles created this Life Tributes page to make it easy to share your memories.

Send flowers to the Knowles family.