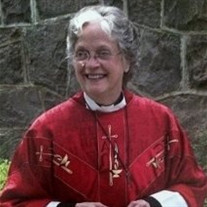 THE REVEREND CANON ANNA (STEWART) POWELL, Rector of St. Martin-in-the Fields Episcopal Church, Lumberton, New Jersey from 2001 until her retirement in 2012, having served as their Vicar prior to that from 1986, died on June 19, 2014 at home peacefully according to her husband, the Reverend John Charles Powell. Under her unique leadership the parish flourished and became a place of gracious hospitality, welcoming to children and animals and a strong leader in care for God’s creation. Mother Powell was born June 19, 1945, in Neosho MO to James D. Marshall, a noted Kansas City artist and art conservator and Helen (Mitchell) Marshall. She grew up in Denver, Fairbanks and New Orleans before returning to Denver. She earned undergraduate degrees in Political Science at Arapaho Community College, AA [1970] and Metropolitan State College, BA [1977]. She and John Powell married in Denver in 1974 and he adopted Gordon, born to Anna from a previous marriage, as his own son. Her Master of Divinity degree was earned at the General Theological Seminary in New York City in 1984, winning the Church and Society Prize that year, along with her husband for an essay on “Homelessness and Hospitality.” She was ordained deacon, along with her husband, in Denver by Bishop Richard M. Trelease, Jr. In May of 1985, Mother Powell was ordained to the priesthood by Bishop Walter Dennis (acting for Bp. Trelease) in Westchester Square, Bronx, where she served briefly as curate. Although St. Martin’s congregation was small when she arrived in 1986, she saw potential and nurtured growth first within the folks who were there, bringing out the talents that were ready to be burnished into strengths for the community and potential leaders for a larger congregation. Wherever she saw positive patterns she reinforced those patterns. St. Martin’s also began to take on a unique character distinct from other churches: First, hospitality was always emphasized; Second respect for every living creature was underscored as an example of creation theology; and Third, dedication to a spiritual journey. One of her closest friends said that the mission statement of St. Martin’s is “You’re here to grow spiritually, or you’re outta here!” These patterns were strengthened at annual all-parish retreats usually held at local camps in the winter. Themes , such as Creation, Grail quest, even a Harry Potter retreat, brought out ways in which the community as a whole had webs of interdependent abilities not only to do great things but to be greater than the sum of the parts. An example is the once-a-month hoagie sale, because it would be impossible to accomplish unless the entire community worked together as a whole. St. Martin’s is marked by happy children learning, families working in the community, animals coming to church, devout silence in prayer, joyful singing and beautiful gardens. She has served the Diocese of New Jersey on the Trial Court, the Environmental Commission, the Ecumenical Commission, the Liturgical Commission, but her greatest dedication has been to the Diocesan Committee on the Diaconate and all of the applicants and candidates for this ministry of service to the Church and the world. In the pocket of the binder for the Committee on the Diaconate, she kept copies of a quotation from St. Francis de Sales. In part, it reads: “Just as every kind of gem becomes brighter and more sparkling when cast in honey, so one seems to sparkle and radiate spiritual light when one is set in the context of one’s vocation. If a person is called to preach God’s truth, then one’s whole demeanor brightens when one begin to preach. If a person is called to be a confessor, advising and guiding people, one glows when people come seeking counsel. This is how we discern one’s spiritual gifts. A person may attempt to perform various spiritual tasks in God’s service; when one radiates holy light, we know that the person is doing that to which God has called one.” How did she glow? Where was her gem radiating? More than anywhere else, it was in establishing and tending to the garden in the Peaceable Kingdom – that place where the lion and the lamb lie down together, where none are hated, or eaten, and all share in God’s glory. She tended her garden well. There will be a Requiem Eucharist a 11:00 AM Wednesday at St. Martin-in-the-Fields, 489 Main Street, Lumberton, followed by a luncheon in the parish hall. The family requests memorial donations be made to either St. Martin-in-the-Fields or the Animal Welfare Association, 509 Centennial Boulevard, Voorhees, NJ 08043.

THE REVEREND CANON ANNA (STEWART) POWELL, Rector of St. Martin-in-the Fields Episcopal Church, Lumberton, New Jersey from 2001 until her retirement in 2012, having served as their Vicar prior to that from 1986, died on June 19, 2014 at home... View Obituary & Service Information

The family of Rev. Canon Anna S Powell created this Life Tributes page to make it easy to share your memories.

Send flowers to the Powell family.