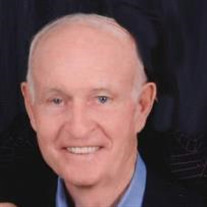 Charles William Feid, 84, passed away September 1st, 2019, with his family by his side. Charles was preceded in death by his parents Charles William and Margaret Winifred Feid, of North Attleboro, MA, his sister Nancy Jane Feid of North Attleboro, MA and his loving wife Theresa Marguerite Feid (February 7th, 2018). Charles was born in North Attleboro, MA on November 14th, 1934. He attended North Attleboro High School and graduated from Springfield College in Springfield, MA (1957) where he was an active member of the campus community, captain of the football team and met his lifetime sweetheart, Theresa Marguerite Harrington. After graduating college, he and Theresa moved to Virginia, where they married and Charles became an officer in the United States Marine Corps and included service as a tank officer at Guantanamo Bay. After his military service, Charles worked for Traveler’s Insurance Company for over 30 years. In 1991, he and Theresa retired to Sarasota, FL where they lived a full life surrounded by family and friends. Charles was an active member of the Church of the Redeemer and a member of the Order of St. Luke. Charles never knew a stranger and blessed all who he has known with his passion for life, unending positivity, never-leave-anyone-behind attitude and most of all, his unfailing Faith. Charles will be remembered as a loving husband, father, grandfather, brother and son. Charles is survived by his sister, Patricia Owen Thelin, daughter Joanna and two sons, Randy and his wife Sharon, and Peter and his wife Kathy. Charles is also survived by his 7 grandchildren. A family memorial service will be held at Grace Episcopal Church, North Attleboro MA and internment with military honors at Mt. Hope Cemetery to follow. Memorial contributions for Charles can be made to the United Methodist Communities Foundation-Collingswood, NJ (https://foundation.umcommunities.org/) or the Alzheimer’s Association. ( https://www.alz.org/)

The family of Charles W Feid created this Life Tributes page to make it easy to share your memories.

Send flowers to the Feid family.