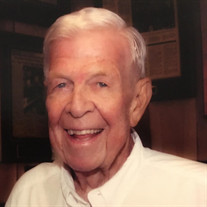 Charles W. Lassen On April 26, 2017 age of 87, Medford Leas at Lumberton. Charles W. Lassen, Financial Consultant and Insurance Broker, Mr. Lassen was a career life underwriter with Connecticut Mutual and MassMutual since 1952, He is a graduate of the University of Connecticut with a BS degree. He was the Business Manager of his school newspaper and played on the Huskies basketball team. He was a distinguished military student and a member of Who's Who in Students in American Universities. He was a member of ROTC and served in the US Infantry in Japan following his graduation. He studied for and earned the graduate degrees of CLU, ChFC, CFS and LUTCF always striving to stay on the leading edge of his financial activities. He was one of the few life insurance agents to serve a two-year term as President of the Philadelphia Association of Life Underwriters and was awarded their top honor for service to the industry, The Presidents' Cup in 1977. His industry honors include over 40 years of membership in the Million Dollar Round Table the top sales group in the insurance industry. He also was a 40+ year recipient of the National Quality Award signifying top quality retention of his insurance clients. He as a member of Who's Who in America and Who's Who in Finance and Industry. He also enjoyed teaching insurance classes. Mr. Lassen prided himself on giving the best possible service to all of his clients ranging from presidents of corporations and banks, and prominent physicians to store clerks. He derived as much satisfaction from delivering a $20,000 death claim to a needy widow as from settling a $2,000,000 death claim for a corporate executive. He was active in civic duties having served as president of the local Little League, Friends of the Library and his PTA. One of his greatest personal accomplishments was seeing each of his four children graduate from Ivy League Universities and gain success in their chosen fields of endeavor. An avid fisherman, he spent most of his free time on the charter fishing boats in Barnegat Light, New Jersey, catching whatever was running including bluefish and stripers. He is survived by his wife of over 30 years, Barbara Lee (nee Brydon) Lassen who served as his executive assistant for many years. Also by his four children Christopher C. Lassen, Suzanne C. Lassen Knox, Anne C. Cortazzi and Elizabeth C. Lassen Havertine, and nine grandchildren. Memorial service will be held at Medford Leas, Route 70, Medford, NJ on May 16th at 11 AM followed by a reception at the same location. In lieu of flowers donations may be made in his honor to Medford Leas Residents' Fund

The family of Charles W Lassen created this Life Tributes page to make it easy to share your memories.

Send flowers to the Lassen family.