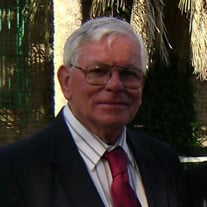 Charles William Newell, age 88 went home to be with his heavenly father on August 20, 2015. Affectionately known to many as ‘Uncle Charlie’, he loved the Lord his God and accepted him as his Savior at an early age. Charles was born on August 23, 1926 to Albertine Ruth Kahlert and Paul Everett Newell. Charles is survived by his loving wife of 67 years, Elizabeth Hopkins Newell. He is also survived by five daughters; Debra Newell Croft (John), Janice Newell Kicher (Larry), Connie Jean Ford (Ron), Heidi Ann Gardner (Ray) and Janine Newell Bauder (Todd). He is predeceased by his son James Allan Newell. He is also survived by 11 grandchildren and 9 great grandchildren. He is survived by bothers Bert Newell, James Newell and sisters Joy Russell and Edna James. He is predeceased by brother Everett Newell and sister Ruth Luethy. Charles served in the United States Navy as a Fireman First Class USNR from December 1944 to July 1946. He served aboard several carriers including the USS Paul Hamilton and USS Okaloosa. After leaving the Navy he worked at Wall Rope Works, the largest company in the U.S. that supplied rope products for the military beginning with the Spanish-American War and was of major importance during the First World War. He later worked as a home contractor, chicken farmer and for many years at Christy’s Supplies in Medford, NJ. He constructed many storage sheds and playhouses. In later years, he was responsible for maintaining the buildings and grounds of the church. Charles was a member of Easton Bible Church for many years and served faithfully in many areas including serving as a Deacon and Sunday School Teacher. He was also an active member in the construction of various buildings on the church property. Charles had a servant’s heart and loved to do work for the church and other missionary work. He traveled to Irian Jaya, Africa and did work for JAARS. The funeral service will be held at Easton Bible Church on Tuesday , August 25th at 10:30am. Viewing 9- 10 am at the church. Burial following in the church cemetery. In lieu of flowers, please make donations to Easton Bible Church 2407 Fostertown Road, Hainesport, NJ 08036 or a charity of your choice.

Charles William Newell, age 88 went home to be with his heavenly father on August 20, 2015. Affectionately known to many as &#8216;Uncle Charlie&#8217;, he loved the Lord his God and accepted him as his Savior at an early age. Charles was... View Obituary & Service Information

The family of Charles W Newell created this Life Tributes page to make it easy to share your memories.

Charles William Newell, age 88 went home to be with his heavenly...

Send flowers to the Newell family.