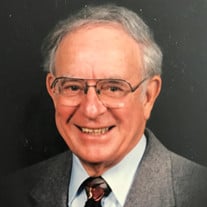 Donald F. Reinhold, age 94, passed away at the Evergreens in Moorestown, NJ on March 11. Son of Floyd and Verna Beddow Reinhold, Don was born in Reading, PA, and raised in South Temple, PA. Following graduation from Albright College, Don was drafted and served honorably in the Headquarters Company of the 232nd Infantry Regiment of the famed Rainbow Division during the final months of World War II. He was at the Dachau Concentration Camp on the afternoon of its liberation and bore witness to the atrocities that had taken place. Following his discharge in 1946, Don attended Rutgers University where he earned his PhD in chemistry. In 1948 he married Bette Irene Mengel, also of South Temple, PA, and to whom he was happily married until Bette’s passing in 2014. He joined the Process Research Department of Merck, Sharpe, and Dohme in Rahway, NJ, in 1951. During a successful 38-year career with Merck, Don co-authored 38 patents, including those for synthesizing Aldomet, which was one of the first drugs used for the treatment of hypertension, Fosamax, and Proscar. Don and Bette’s life together included homes in New Brunswick, Metuchen, North Plainfield, Morganville, Tinton Falls, and finally Moorestown, all in New Jersey. A trombonist as a teenager and young adult, Don had a great love of music and enjoyed live concert performances throughout his life. His vocal skills as a bass were welcomed in the church choirs of the United Church of Christ in Plainfield, NJ, and later at the Holmdel Community United Church of Christ. For many years, Don enjoyed planning and executing home improvements, and he maintained an active basement workshop, where he built furniture pieces for the family. In retirement, Don and Bette traveled to over 25 countries and enjoyed every moment with their family and many close friends. Don is survived by his and Bette’s three children, Donald Jr., Roger, and Marlise (Bickel), and their spouses, Patricia, Anne, and Robert; three granddaughters, Rebecca Reinhold, and Allison and Mollie Bickel; and by his younger sister, Robin Reinhold. A service will be held at a future date. Memorial contributions may be made to the Chemistry Departments at Rutgers University, Albright College, or Bucknell University, or to a science or musical organization of your choice.

The family of Donald Floyd Reinhold created this Life Tributes page to make it easy to share your memories.

Donald F. Reinhold, age 94, passed away at the Evergreens in...

Send flowers to the Reinhold family.