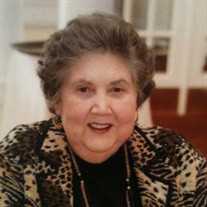 Dorothy Marmon Godfrey entered into eternal peace on March 25 at the age of 84. She is survived by her beloved daughter Susan and her beloved granddaughter Dana, and predeceased by the love of her life Edward Lancaster Godfrey, to whom she was married for 50 wonderful years at the time of his passing. She is also survived by her beloved family: James and Gloria Rosanio, Kaitlyn, Shawn, Payton and Avery Pettit, sister-in-law Ann Godfrey, and many nieces and nephews whom “Aunt Dot” cherished. She was also predeceased by her loving parents Joseph and Anna and her cherished in laws, Alfred and Edna, as well as dear sisters-in-law Jean and Elfa, and her dear brothers-in-law, Alfred, Milton and Warren. Dorothy was born on August 29, 1933, the daughter of the late Joseph and Anna Heide Marmon. She moved from Philadelphia to Mount Laurel, NJ when she was a teenager. She graduated from Moorestown High School in 1952 and attended Temple University. She married her high school sweetheart Edward in 1955. Dorothy worked for the Campbell Soup Company while her husband served in the Pacific Fleet of the United States Navy during the Korean War. In 1960, she went into business with her husband as the owners of Marmon’s Grocery Store, where they worked side side by side for nearly 30 years. Dot and Ed were active in several civic organizations including the Mount Laurel Jaycees and Jayceettes, and they ran the Mount Laurel Jaycee Carnival for many years. Some of the happiest times of Dot’s life were running a business in the community with her husband, traveling in their Winnebago with Ed, Susan and her sisters and brothers in law, family holidays with the Rosanios, the annual Godfrey Family Picnic and seeing Dana perform on stage in all her musical theater productions. Dot and Ed both had the wanderlust and traveled as much as they could through the years. The greatest memories for Dot were their annual Disney trips, time spent riding around Fort Wilderness on their bicycle-built-for-two, their summer road trips when Dot was often the one behind the wheel of the Winnebago, and in later years, traveling to Russia to meet her long-awaited granddaughter Dana Nicole. A Memorial service will be held in celebration of a life well lived at LEWIS FUNERAL HOME, 78 E. Main Street, Moorestown at 4 PM on Friday, March 30. Visitation from 3-4 PM. Memorial donations may be made in Dorothy’s memory to Deborah Hospital Foundation, PO Box 820 , Browns Mills , NJ 08015

Dorothy Marmon Godfrey entered into eternal peace on March 25 at the age of 84. She is survived by her beloved daughter Susan and her beloved granddaughter Dana, and predeceased by the love of her life Edward Lancaster Godfrey, to whom she... View Obituary & Service Information

The family of Dorothy M Godfrey created this Life Tributes page to make it easy to share your memories.

Send flowers to the Godfrey family.