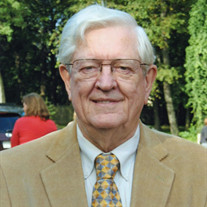 Duane Oscar Gustad was born in Volin, South Dakota on January 14, 1937. His parents were Oscar and Ellen Gustad. He spoke of his life on the farm, the snowy winters, and the many chores he and his sister, Muriel, would have to carry out. He was especially vocal about his dislike for handling the pigs who were loud, smelly and mean. Duane was a good student and enjoyed playing basketball, studying woodworking and acting in high school drama productions. Duane attended the South Dakota School of Mines and Technology where he obtained his engineering degree in Metallurgical Engineering in 1959. He enlisted in the US Army and after some traveling around, was stationed at Frankford Arsenal in Philadelphia, Pennsylvania. One of his side jobs on that base was a bartender. Duane often told funny stories about his time at Frankford Arsenal and how his commanding officers didn’t really know what to make of these engineer-soldiers who often seemed to try their patience. Duane met Maryann Devine at Frankford Arsenal and they were married in 1962. Duane was discharged from the Army and stayed on at Frankford Arsenal as a civilian employee. After Kathleen was born in 1963, they moved to Delran, NJ. John was born in 1969 and David in 1971. The family moved to Succasunna, NJ in 1977 when Frankford Arsenal was closed, the work there transferred to Picatinny Arsenal in norther NJ. Duane was actively involved in coaching various little league teams and was even the Little League Commissioner in Roxbury Township one year. He liked to go to sporting events and even drove the family into New York City periodically to take in ballgames. He acknowledged he wasn’t the world’s best driver, so these trips were often full of extra thrills and the occasional bad word. Duane seemed most happy when he had a project to do around the home. Building decks, gazebos, installing tile, working on cars, and painting/wallpapering were sources of enjoyment and pride. The ultimate source of enjoyment and pride were his grandsons Michael, Devin, Jamie and Aidan. He relished this Grandpop role and even handcrafted a wooden cradle prior to the birth of his first grandchild. When they were infants, often it was only Grandpop who had the perfect touch to calm a fussy baby with endless walks to get them to sleep. Duane and Maryann moved back to Delran after retirement from Picatinny Arsenal. Although he did some part time work related to his old job, Duane now had more time to devote to projects around the house and traveling. Las Vegas was a favorite destination and Duane enjoyed playing the blackjack tables. In 2003, they adopted Annie, a small Cairn Terrier, who unofficially ruled the roost. Annie loved taking Duane on long walks which helped him keep in shape. After Maryann’s death in 2006, Duane returned to his Lutheran roots and found a new church family at St. Matthews Church in Moorestown. He was a lector and became involved in Bible Studies, the Men’s work group, and in the St. Matthews Players drama group productions. Duane met Bernie Williams at St. Matthews and they were married in 2010. Duane (and Annie) moved to Bernie’s house in Cinnaminson and join with her family of seven cats. He also gained two step-daughters – Vicki and Wendy and five step grandchildren – Chris, David, Kayleen, Devin and Sam. Duane really enjoyed these golden years. He and Bernie traveled and were very involved in social group activities. He was able to enjoy the theater and music productions in Philadelphia. Some family trips with his grandsons included Ocean City, Myrtle Beach, and Williamsburg. Although Duane slowed down over the past few years, he continued to enjoy eating and watching Fox News and Philadelphia sports teams. Pizza, hoagies, spaghetti, cookies, and ice cream were highly favored treats… that were often best, like many things, when followed by a little nap in the recliner. Memorial service Friday 10:30 am at St. Matthew Lutheran Church, 318 Chester Ave. Moorestown, NJ. Visitation 9:30 – 10:30 am at the Church. Please No Flowers : Memorial contributions to St. Matthew Lutheran Church.

Duane Oscar Gustad was born in Volin, South Dakota on January 14, 1937. His parents were Oscar and Ellen Gustad. He spoke of his life on the farm, the snowy winters, and the many chores he and his sister, Muriel, would have to carry out.... View Obituary & Service Information

The family of Duane Gustad created this Life Tributes page to make it easy to share your memories.

Send flowers to the Gustad family.