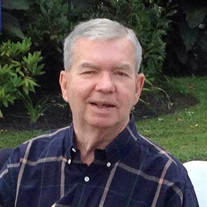 Edward William Brickner III, 86, of Medford Leas (formerly of Moorestown. NJ) passed away on December 16, surrounded by members of his family. The son of Edward and Helen (McChesney) Brickner, Bill grew up in Moorestown where his father was a barber on Main Street. He would later raise his own family on West Maple Avenue. As a child, Bill developed a love of horses. He and his good friend Kent Deasy would ride in areas of Moorestown that are now residential or corporate developments. The Lone Ranger had Silver. Bill had Gobey. Bill graduated from Moorestown High School (1953) and Seton Hall University (1957) where he made lifelong friends. After serving in the Army until 1959, Bill embarked on a career that spanned over 40 years as a principal at Mech-Elec Sales Company, a manufacturers’ representative firm specializing in industrial plastics and foams, located in Medford, NJ. Current and former residents of Moorestown fondly remember Bill being a mainstay in the ticket booth at the annual Moorestown Home and School Fair, attending his children’s sporting events, and – most indelibly – walking his dog Kelly with cigar in hand, wearing shorts and loafers with no socks – even in the bitter cold of winter. A friendly person by nature, he often stopped to chat with both friends and strangers or wave to a passerby. In addition to cheering on his beloved Seton Hall Pirates, Bill was also a Philadelphia sports fan, particularly the Phillies and Eagles. He attended the 1960 NFL Championship game at Franklin Field where the Eagles defeated the Green Bay Packers. His season tickets are still with his family, going from the 600 level at Veterans Stadium to the 25 yard line, 10th row at Lincoln Financial Field – a legacy his children and grandchildren now enjoy. Bill valued spending time with his friends and family and he knew of no better time and place than during the summer months in Ocean City, NJ. He loved the shore, talking at the beach, and taking a “dip.” Warm conversations at the shore were replaced in the winter by warm fires in his family room. Besides pride in his family. Bill is survived by his four children: Nancy (Tom) Londres of Moorestown, Dan (Carolyn) of Haddonfield, Matt of Mt. Laurel, and Libby (Steve) Majewski of Medford. His grandchildren were some of his greatest joys; Erin, Riley, Katie, and Tommy Londres of Moorestown; Leo, Henry, Campbell, and the late George Brickner; Meredith, Aidan, and Helen Brickner; and Luke, Liam, Ellie, and Madeline Majewski. He also is survived by five nieces and nephews: Pat Cowan, Lis Barling, Katie Alexander, Shay Cowan, and Chris Cowan. Bill was pre-deceased by his sister Anne Brickner Cowan and niece Maggie Cowan Scott-Williams. He was fortunate to have a team at Medford Leas that was kind and caring. Relatives and friends are invited to attend his visitation on Sat., Dec. 21, from 9:00 to 10:00 a.m. at the Lewis Funeral Home, 78 E. Main St. Moorestown. Mass of Christian burial is at 10:30 am at Our Lady of Good Counsel Church, 42 W. Main St. Moorestown. Interment follows at Mt. Carmel Cemetery. In lieu of flowers, memorial contributions may be made to the Our Lady of Good Counsel Church where Bill was a lifelong parishioner serving as an altar boy and an usher for many years.

Edward William Brickner III, 86, of Medford Leas (formerly of Moorestown. NJ) passed away on December 16, surrounded by members of his family. The son of Edward and Helen (McChesney) Brickner, Bill grew up in Moorestown where his father was... View Obituary & Service Information

The family of Edward William Brickner III created this Life Tributes page to make it easy to share your memories.

Send flowers to the Brickner family.