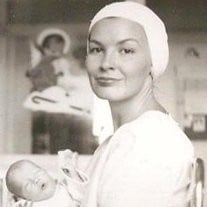 Elizabeth Dunn Mutch, 88, died peacefully on August 15, 2013 after a lengthy but determined battle against congestive heart failure. She was predeceased by her loving husband of 52 years, Dr. John C. Mutch. Mrs. Mutch was a longtime resident of Moorestown, New Jersey, and Buck Hill Falls, Pennsylvania, where she resided in summer months. In recent years, Mrs. Mutch maintained a winter residence in Ponte Vedra Beach, Florida, where she enjoyed the combination of her many interests and aptitudes, including birds, duplicate bridge, and golf. Elizabeth was oldest of three children born to a Quaker family in Palmyra, NJ. In her youth she spent many happy days at her family’s Salem, NJ cottage beside the Delaware Bay. An extremely bright student, she was a graduate of George School in Newtown, PA., at the age of 16. Following graduation she pursued a nursing degree first at Guilford College in Greensboro, North Carolina, and later at Columbia Teachers College in Manhattan. Her love of babies led to a nursing position in the nation’s first neonatal intensive care unit, at Philadelphia’s Pennsylvania Hospital, while she was concurrently earning credits at the University of Pennsylvania. In the 1950s, through her dedicated work in the groundbreaking unit, she was featured on the cover of Philadelphia Magazine. While at Pennsylvania Hospital, Mrs. Mutch met her husband, who was a Physician in residence. The couple was married in San Antonio, Texas, prior to Dr. Mutch’s service in World War II, and later as a MASH surgeon in Korea. Eventually settling in Moorestown, NJ, where Dr. Mutch opened a local medical practice, Mrs. Mutch lovingly-raised a family of five. She became a prominent and active member of the community, especially within the Moorestown Monthly Meeting. She later developed a second career as a trusted real estate broker with the firm, Stockwell Knight Company. She is survived by her brother and sister-in-law, Janet and Howard Dunn, of Salem, NJ; children, Deborah Olander of Ponte Vedra Beach, FL; Julia Marie Mutch of Moorestown, NJ; John C. Mutch, Jr., of Nazareth, PA; James Mutch of Moorestown, NJ; and Andrew C. Mutch of Media, PA. She will be especially missed by her ten grandchildren and step-grandchildren, to whom she was a model of grace. Funeral arrangements will be held at Moorestown Monthly Meeting on 118 East Main Street in Moorestown, NJ, on Monday, August 19th, at 12:30 pm. Internment is private. In lieu of flowers, donations can be made in her name to the Moorestown Monthly Meeting.

Elizabeth Dunn Mutch, 88, died peacefully on August 15, 2013 after a lengthy but determined battle against congestive heart failure. She was predeceased by her loving husband of 52 years, Dr. John C. Mutch. Mrs. Mutch was a longtime resident... View Obituary & Service Information

The family of Elizabeth L Mutch created this Life Tributes page to make it easy to share your memories.

Send flowers to the Mutch family.