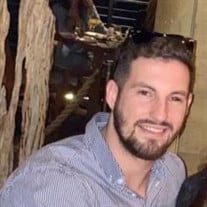 Evan Paul Toepel, formerly of Mount Laurel, New Jersey, died on Saturday, March 20, 2021 at the age of 29. Evan was born November 4, 1991 in Philadelphia, Pennsylvania to Paul and Linda Toepel. He grew up in Mount Laurel, New Jersey and was a graduate of Lenape High School, Class of 2010. An avid sports player, he excelled in football and lacrosse. Evan began playing football as a young boy and ultimately quarterbacked his high school team. As a standout lacrosse midfielder, he played for the Lenape High School Boys Lacrosse Team and Dukes Lacrosse Club in Pennsylvania. Evan was confirmed at First United Methodist Church of Moorestown and participated in volunteer activities to help the community, particularly children. After high school, Evan relocated to Fort Lauderdale, Florida and worked for six years in southern Florida in a variety of positions, including business development for several organizations in the behavioral health field. In 2018, he moved to Los Angeles, California, and continued working in operations and care coordination for a behavioral health group. Evan was known by his colleagues and co-workers to be compassionate, loyal, and hard-working, helping many, many people find their way into recovery. Evan was blessed with a caring family and many friends. He is survived by his father Paul, his mother Linda (Morrison), and his sister, Lauren. He is also survived by his grandmother Patricia J. Ermold (Pittard) and grandfather Harry L. Morrison (Donna); aunts Susan Morrison and Elizabeth (Toepel) Schmidt (Dan); uncles David Morrison (Phebe), Richard Morrison (Nina) and Matthew Morrison; many cousins; and, an extended family, all of whom loved and cared deeply for him. Evan’s family is very grateful for the brotherly love given to him by his close friend and brother, Antonio Troisi, and his associates in Los Angeles. Evan will be remembered by his family as a kind and compassionate person. Our hope is that as we touch the lives of others, the Lord will help us to be the kind of person, like Evan, who leaves behind a lovely sense of peace and serenity. A memorial service will be held on Saturday, April 10, 2021 at First United Methodist Church in Moorestown, NJ, with visitation at 1:00 PM, followed by the service at 2:00 PM. Covid restrictions of Mask Wearing, Social distancing and Attendance capacity will be in place. In lieu of flowers, the family would welcome donations to be made in Evan’s name to: Seeds of Hope Ministries, 1700 S. Broadway, Camden, NJ 08104, or www.seedsofhopeministries.org.

The family of Evan Paul Toepel created this Life Tributes page to make it easy to share your memories.

Send flowers to the Toepel family.