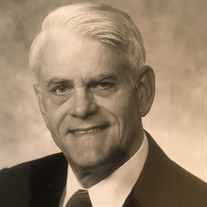 Frank H. “Bud” Radey, Jr. A.I.A died on August 1, 2016 age 84. of Moorestown, NJ Bud has always said he was the luckiest person he knew, and fulfilled all of the aspirations he ever had. His childhood was spent in Collingswood where he “adopted” Newton creek and the woods and farms around Cuthbert Rd. Here he trapped muskrats and hunted small game with his pet hound. He loved sports, especially the high hurdles., wrestling and football, lettering in these at the Pennsylvania Military Preparatory School. At the Georgia Institute of Technology, he majored in architecture and belonged to the fraternity of Phi Gamma Delta with which he maintained a life-long affinity. 1960 his banner year, marrying his sweetheart, Patricia Hoopes Lapp and achieving his architectural license. He practiced with his father until 1975, at which time he became sole practitioner specializing in schools and corporate construction. Piloting his own plane he was able to efficiently service his clients throughout New Jersey and Pennsylvania. For many years, Mr. Radey was a licensing examiner for the National Council of Architectural Registration Boards and graded over two thousand site and building design tests taken throughout the United State and Canada. He served as Commissioner of the New Jersey State Board of Architects. He received an American Institute of Architect’s “Presidential Citation” for his success in the formulation of the N.J. Building Design legislation which specifies the areas of professional responsibilities of architects and engineers. In this regard, he also received a “Letter of Commendation from the 1991 Deputy Attorney General. Mr. Radey served as the First Chairman of the Legislated Joint Committee of Architects and Engineers which adjudicates disputes between the two professions. As a member of the American Arbitration Association, Mr. Radey served on numerous panels providing non-appealable awards in construction disputes. He was a Trustee of the Stratford Military Academy and served for several years as a member of the Moorestown Appearance Committee. He was a volunteer driver for the American Red Cross and personally donated over 7 gallons of blood, starting from his days in College. Husband of 56 years of Patricia (nee Lapp). Father of Frank Radey III and his wife Carolyn, Cheryl Lynne Simpson and her husband Jonathan. Grandfather of Danielle and Michael Radey, Jack, Max and Benjamin Simpson. Memorial service Sunday 12 Noon at St. Matthew Lutheran Church, 318 Chester Ave. Moorestown, NJ. Visitation 11: 30 am to service time Interment Private. Please no Flowers. Memorial contributions to the Church Building fund or Salvation Army

Frank H. &#8220;Bud&#8221; Radey, Jr. A.I.A died on August 1, 2016 age 84. of Moorestown, NJ Bud has always said he was the luckiest person he knew, and fulfilled all of the aspirations he ever had. His childhood was spent in Collingswood... View Obituary & Service Information

The family of Frank "Bud" Radey, Jr. created this Life Tributes page to make it easy to share your memories.

Send flowers to the Radey family.