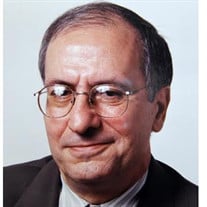 Fred J. Abbate, PhD of Moorestown, NJ passed away Friday, August 11th at the age of 77. He was a loving husband, father, grandfather as well as accomplished professor, executive, public policy administrator, author and playwright. Dr. Abbate was born in New Haven, Connecticut on November 23rd, 1939 to Italian immigrants Prisco and Lucia Abbate. In 1961, he received his AB degree from Fairfield University and went on to get a Master’s degree from Boston College and a PhD in philosophy from Columbia University. He moved to Moorestown with his wife and three sons in 1970 when he began teaching philosophy at Rutgers University in Camden. In 1977, he began working at Atlantic Energy where he held several executive positions. From 1995 to 2006 he served as President and Chief Executive Officer of the New Jersey Utilities Association (NJUA), a position he held until July 2006. He then became a partner in the Performance Excellence Group, teaching leadership skills to educators and professionals. The March 1990 edition of Money Magazine featured him on the cover for a story about people who had made significant career changes. Dr. Abbate served in multiple public policy, education and arts leadership roles, including: Director of Leadership New Jersey; Chair of the New Jersey Utility Education Committee; Chair of New Jersey Department of Labor's Employer Council; Vice Chairperson of the New Jersey State Council on the Arts; member of the Board of Advisors of the Bloustein School of Planning and Public Policy at Rutgers University. Since 1987, Fred served on the board of Thomas Edison State University. He also gave his time to numerous non-profit causes serving as chairman of the board for Volunteers of America Delaware Valley, Chairman of the Burlington County Chapter of the March of Dimes New Jersey State Board of Directors, as well as a member of the New Jersey Reads Foundation board of directors. Between 2000 and 2017 Dr. Abbate taught philosophy at Drexel’s Pennoni Honors college in Philadelphia. In 2010 he won the college’s first ever award for outstanding teaching. In 2011, Abbate also created Jack the Ripper Through a Wider Lens, the first ever philosophical conference themed around the case, which was held at Drexel in 2011 and featured experts from around the world. He was the author of several philosophy books, articles, a novel and several plays including Campion’s Will which was produced at Shakespeare festivals in Chicago and New Orleans in 2016. He wrote the play The Idea of Edison, which was produced by NJ Public Television in 1979, celebrating the centennial of the lightbulb. An amateur magician, musician and actor, he was involved with the Burlington County Footlighters for several years. Dr. Abbate is survived by his wife of 52 years, Rosemary, and his three sons, Jonathan (Carolyn), Jason and Jeremy (Anina), along with seven grandchildren: Matthew, Catherine, Quinn, Stephen, Sara, Theo and Camilla. He was predeceased by his beloved sisters Mary Snopkowski and Martha Amici. A memorial service is planned for Friday, September 8th in Mount Laurel, NJ. For information, please email: [email protected] In lieu of flowers, the family is requesting donations be made to: Volunteers of America Delaware Valley, 235 White Horse Pike, Collingswood, NJ 08107 or Samaritan Healthcare and Hospice, 5 Eves Drive #300, Marlton, NJ 08053.

The family of Fred Abbate created this Life Tributes page to make it easy to share your memories.

Send flowers to the Abbate family.