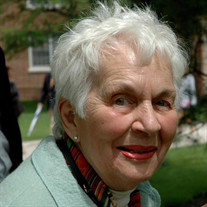 Georgia 'Tula' Floridis passed away from natural causes on May 15, 2020. She was 92 years old. Tula was born in Ann Arbor, Michigan to successful Greek immigrants, Angelo and Thalia Poulos. Thalia died when Tula was very young and in time, her father remarried a Greek girl. Tula, her sister Bertha and brother Bill eventually became part of a blended Greek family. Tula suffered and recovered from TB as a teenager, spending 2 years on the TB floor in the hospital. After finishing high school in the hospital, she entered the University of Michigan where she met her husband to be, George Floridis of Dayton, Ohio. After marriage, and having children in Michigan, Tula and George moved their young family to South Jersey. Tula balanced her time at home between caring for her children, leading a Girl Scout troop, volunteering in the library at the local high school, singing in the church choir, golfing, and volunteering to drive handicapped children to their appointments. Later in life, Tula and George moved to South Carolina where they had 3 happy years before George passed away. Tula then, moved back to family in New Jersey, and spent her later years volunteering at a retirement home before she became a resident of the same home. Tula’s husband George, whom she was married to for almost 50 years, predeceased her. She was well loved by her two daughters, Julie Floridis Sanders and husband Richard and Lisa Floridis Griffith and husband Chris, grandchildren Curt Sanders and Elizabeth Sanders, great grandchild Lily Sanders, and Tula’s sister Bertha Spencer. She will be missed. Due to the Present circumstances there will be no services. In lieu of flowers or a service, Mom’s wishes were to support the National Parks.

Georgia 'Tula' Floridis passed away from natural causes on May 15, 2020. She was 92 years old. Tula was born in Ann Arbor, Michigan to successful Greek immigrants, Angelo and Thalia Poulos. Thalia died when Tula was very young and in time,... View Obituary & Service Information

The family of Georgia Tula Floridis created this Life Tributes page to make it easy to share your memories.

Send flowers to the Floridis family.