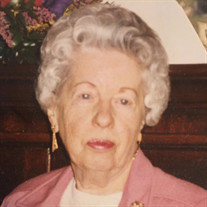 Geraldine “Geri” Cook (nee Wilson) died peacefully on Wednesday, April 18th, 2018 at the Evergreens in Moorestown, NJ. She passed fifteen minutes before her 101st birthday. Geri is predeceased by her husband George Oberlein, and two daughters; Suzy Ann Oberlein, who died of leukemia at the age of 8 on April 5, 1955, and Judy Marie Oberlein who died after a head injury at school at the age 17, July 17, 1960. Geri was born on April 19, 1917 to Clifford and Marie Wilson at their home in Geneva, New York. Geri had a step brother from her mother’s second marriage, Richard Wilson. Geri was very close to her mother, Marie Doerr who came to the United States from Germany and died at the age of 89, on August 9, 1979. Geri’s mother taught her to be the strong, independent woman that she was. Geri grew up in Macon, Georgia where she acquired a southern accent. When Geri lived in Macon, Georgia she liked to play with the African American children who were her neighbors, and they would go behind the barn and smoke chopped up hay in corn cob pipes. Her father caught her and spanked her, as according to him, ladies didn’t smoke. Later, Geri was a life long non filter cigarette smoker who quit at the age of 65 by just stopping. That was Geri's steely resolve with everything that came her way. When Geri was a teenager, her parents divorced, and she and her mother moved to Newark, NJ. Later, Geri studied bookkeeping and accounting for two years and moved to New York City where she worked for an advertising company and became very successful. As a working woman Geri commanded a lot of respect from those she worked with. She signed all documents “Geri” so that people would not know that she was a woman. She also demanded that the men she worked with watch their language when she was around. She told them that she didn’t care what they said when they were together but she would not tolerate cursing in her presence. When World War II began Geri quite her job and went to work for the government on a secret clearance project in conjunction with the Coast Guard, Navy and F.B.I. She was stationed at the navy yard in Boston. Geri would marry again in her 30’s to Harry Cook. Geri and Harry remained married for 5 years before divorcing and going their separate ways. She moved to Baldwin, NY and continued to work until she retired at the age of 66. After retirement she moved to Crestwood Village in Whiting, NJ Geri was aware of her failing eye sight for many years and became active with the Library for the blind in Trenton NJ. One year they had a circus festival in the parking lot where they had brought in an elephant, and Geri with her adventurous spirit asked if she could be the first to ride it and found that she enjoyed it tremendously. Geri was well traveled internationally visiting Greenland, England, Germany, Haiti and the Bahamas; and decided, for her last trip due to failing eyesight, to go to Iceland, because at the time, no one ever went there! Geri retired from work in 1982 and moved to Crestwood Villages in Whiting, New Jersey and attended St. Stephen’s Episcopal Church in Whiting. Throughout her life she was a faithful Episcopalian. In 1998 she moved to the Evergreens in Moorestown, New Jersey where she became very active in the community. She served as the Van Duzer representative on the Resident Council. She was also extremely instrumental in the creation of the Vision Assistance Program along with Virginia Devery, former Director of Development. Gerri lived at the Evergreens for 20 years and was a faithful member of the Evergreens Chapel. Geri persevered in the face of the many losses that she experienced sustained by her faith in God, and her belief that she would be reunited with her girls after her death. Even as her eyesight failed her, her strong faith and belief in God’s mercy sustained her. A service of thanksgiving for her life will be celebrated at The Evergreens chapel, 309 Bridgeboro Road, Moorestown, New Jersey Tuesday, April 24th at 10:30 am. Internment will follow at Pine Lawn Memorial park, Farmingdale, Long Island.

The family of Geraldine A Cook created this Life Tributes page to make it easy to share your memories.

Send flowers to the Cook family.