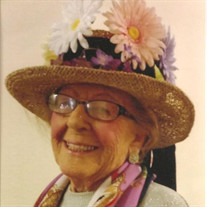 Gladys Frances Hulitt, age 98, went to her eternal home on March 15 at the Waconia Good Samaritan Care Center. A celebration of life service will be held on Saturday, April 9, 2 pm at Westview Acres [433 W. 5th avenue] in Waconia. Gladys, who lived in southern New Jersey for the first 93 years of her life, moved to Waconia in 2010 to live at Westview Acres and be close to family. She was born September 30, 1917, in Centre Square, NJ, the first child of the late Clarence D. and Elva K. Norton who were a farming family growing tomatoes and asparagus. In 1939 she married the Rev. Daniel Hulitt, a Methodist minister from the Philadelphia/New Jersey conference, and were blessed with a marriage of 68 years. They served several churches in southern Jersey and ultimately retired to Marmora, NJ. Her first career involved the duties of a pastor’s wife and mother to two sons, Douglas Ray, and Daniel Brian. With maturing boys she used her free time to volunteer at the Methodist Hospital in Philadelphia. She later became Director of Volunteers, and continued to expand the services offered by the loyal volunteers. She ultimately accepted the position of the Director of Public Relations/Volunteers, one that she would hold until her retirement. She served in many professional capacities, including President of her regional Public Relations Society, as well as a member of numerous boards and Methodist associations. In 1974 she was, for a short time, the custodian of the Stanley Cup for the Philadelphia Flyers. A boy, injured by a Philadelphia PD horse during the Flyers victory parade became a focus point for the Flyers. It took a few days for him to be willing to be photographed, and rather than transport the cup back and forth the Flyers left it with Gladys. During those same days two student nurses found a ring in the grass by the Broad Street access to the hospital. They brought it to Gladys who recognized it as a Flyers Championship Ring, and at a little ceremony in the hospital, had it returned to #14, Joe Watson, the rightful owner. Watson said recently that he vividly remembers the day when the ring flew off his waving hand, and later when returned. Gladys and husband Dan enjoyed many travels throughout the USA and the world, often traveling by rail and serving as the hosts for the trip. Many of the home trips involved time with their 4 grandsons. Gladys loved to cook and paint, and her 100+ year old recipe for “meat pie” became a staple for many coast to coast family gatherings. Her art has been displayed at various venues, most recently at Westview Acres and currently at the Waconia Library. Gladys is preceded in death by her parents, Clarence and Elva Norton; her husband, Daniel Hulitt; sister, Lois Jess; and son, Douglas Hulitt. She is survived by her loving family: brother, Dr. Clarence I. Norton(Jeanie)[N.Augusta SC];son, Daniel B.[Jewell], Waconia, MN; Grandsons James,[Meghan] Oxford, GA; Brooks [Maria], Philadelphia, PA; Chris [Debi] Camarillo, CA; Geoffrey [Jess], Eden Prairie, MN; and nephew Carl Jess [Brenda], West Palm, FL. Also surviving are great grandchildren Juliana, Amelia, Ryan, Cameron, Alexander and Sophia and numerous cousins, nieces and nephews. A celebration of life and service of internment will be held April 23, 1 pm at the Centre Square Union Methodist Church in Logan Township, N.J. Memorials in lieu of flowers can be sent in memory of Gladys to Good Samaritan Center, 433 W. 5th Street, Waconia MN, 55387 or Centre Square Union United Methodist Church, c/o Rev. Daehyun Park, 7 Church St., Bridgeport, NJ 08014.

The family of Gladys Hulitt created this Life Tributes page to make it easy to share your memories.

Send flowers to the Hulitt family.