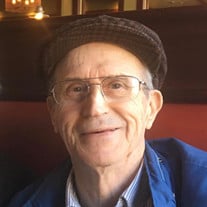 Heinrich Georg Pfeiffer (also known as “Henry” and “Opa”) died peacefully at the age of 91 on January 3, 2022, under the compassionate care of Wiley Mission nurses. Heinrich was born October 6, 1930 and was raised in Eberbach, Germany. He immigrated to London, Ontario, Canada in 1958 and was followed a year later by Elsbeth Sigmund, where they married on December 19, 1959. Together, they immigrated to the United States in 1960 and initially resided in Philadelphia. In October 1962, they moved to their home in Voorhees Township, NJ. While in Canada, Heinrich worked at a car wash and gathered Canadian nightcrawlers, which he sold to fishermen. He did this until he was able to obtain a job in his trade as a Tool and Die Maker, with Bell of Canada. Once in America, he worked at several Tool and Die shops, including Magnetic Metals, Fire Tool and Die, and Penny Plate. In 1971, he began working at EKCO Products in Clayton, NJ– which later became PCA (Packaging Corporation of America)– and retired 24 years later, in 1995. At PCA, he rose to become the leader of the Tool and Die department and established a Tool and Die apprentice program, modeled after the apprenticeship he completed in Germany. Heinrich will be remembered as a kind and compassionate husband, father, and grandfather who loved being surrounded by his family. He was known for his strong work ethic, steadfast faith, ability to strike up a conversation with anyone, and sense of discipline– as well as for his loving nature, quick wit, and ability to repair anything. He enjoyed gardening with Elsbeth, which was reflected in the beautiful flowers and gardens surrounding their home. Heinrich and Elsbeth always worked hard for their family to understand, embrace, and keep their German heritage alive. They maintained friendships with many that they grew up with in Germany. Henry encouraged his family to be well-educated, work hard, and always show respect. He also taught them to save for a rainy day and follow their dreams. Heinrich was a beloved husband of 60 years to the late Elsbeth Lina Pfeiffer (nee Sigmund) and father to Michael Pfeiffer (Lisa Ulmer) of Mount Laurel, NJ and Thomas Pfeiffer (Diane) of Forest Hill, MD. He was the brother of the late Hans Pfeiffer (Eberbach, Germany) and is survived by his grandchildren Michael Pfeiffer Jr., Kirstin Pfeiffer, Thomas C Pfeiffer, Lauren Pfeiffer, and Jonathan Pfeiffer. Due to the present circumstances, a memorial service will be scheduled at Prince of Peace Lutheran Church in Marlton, NJ in early Spring 2022. In lieu of flowers, memorial contributions can be made to Wiley Mission, 99 E Main Street, Marlton, NJ 08053.

Send flowers to the Pfeiffer family.