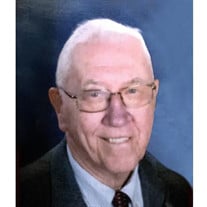 HENRY R. ROSSELL “HANK” age 95 of Moorestown, born and raised in Collingswood and formerly of Medford, passed away peacefully on April 24 surrounded by his loving family. After graduating from Collingswood High School in 1944, Hank entered the University of Pennsylvania on a football scholarship and earned a BS in Economics from the Wharton School after serving in the US Armed Forces during World War II. Upon completion of his studies at Penn, Hank joined the Insurance Department at Sun Company Inc., rising through the ranks to Director of Insurance. He also served on the executive committee of Oil Insurance Ltd. and Oil Casualty Insurance Ltd., was an expert witness for the Exxon Valdez oil spill investigation, and a consultant for Alexander & Alexander’s Energy Division. His work took him to several countries, and his love of travel, both domestic and international, continued into his retirement. A gifted athlete, Hank excelled in football, basketball and baseball at Collingwood High, earning All South Jersey honors in football as center, set a foul shooting record that stood for many years, and was a pitching ace. A rarity for any time, he lettered in three sports at Penn, including being part of the 1947 football team, one of the school’s greatest. He also played for the US Army’s football team during the war. Proud to be a “Munger Man” all his life, Hank continued to attend annual reunions at Franklin Field well into his 80s. He also was an active football official at the high school and college level for 25 years and served a term as President of the NJ Football Official Association. Raised with a strong work ethic and sense of civic duty, Hank served on numerous boards throughout his life, including the Brooks Irvine Memorial Football Club, the Collingswood School Board, and the Collingswood High School Athletic Hall of Fame (where he was in the first induction class in 1991). He also coached Little League and was his children’s and grandchildren’s #1 fan who could be spotted standing on the sidelines with his signature hat. A longtime member of Trinity Episcopal Church where he counted the money and participated in Men’s Club activities, Hank was also a volunteer tax counselor for the AARP and served on the Finance Committee at the Evergreens in Moorestown, where he lived with the love of his life, Caroline, for the past eight years. Nowhere was Hank more content than when he was with his family or watching a sporting event, especially his beloved football. Never a lover of the shore, he nevertheless made sure that his family enjoyed a vacation in Cape May every summer. He is survived by his beloved wife of 71 years, Caroline (nee Bieleski), his daughters Marie Kolynych (Michael) of Hainesport and Christine Norris (Christopher) of Cherry Hill, his son, Henry Rossell, Jr. (Paula) of Louisville, CO, his grandchildren, Andrew Rossell (Courtney), Emily Rossell, Patrick Norris, and Amanda Norris, and great-grandchildren Lila Graham and Keya Graham, as well as numerous nieces and nephews. He was pre-deceased by his parents, Harry and Louise Rossell (nee Riechmann), sisters Betty Hunt and Louise Godshall, and daughter Louise P. Rossell. Relatives and friends are invited to the Visitation on Thursday from 8:30 to 10 AM, with a memorial service to follow at Lewis Funeral Home, 78 W. Main St., Moorestown. If desired, a donation may be made in lieu of flowers to the Collingswood Athletic Hall of Fame, PO Box 512, Collingswood NJ 08108 to establish a scholarship in Hank’s name.

HENRY R. ROSSELL &#8220;HANK&#8221; age 95 of Moorestown, born and raised in Collingswood and formerly of Medford, passed away peacefully on April 24 surrounded by his loving family. After graduating from Collingswood High School in 1944, Hank... View Obituary & Service Information

Send flowers to the Rossell family.