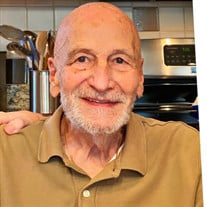 Henry (Harry) Volpe, 87, of Mount Laurel, NJ passed away peacefully in his sleep on the morning of Sunday, February 7th, 2021. Born and raised in Philadelphia, Harry attended the Philadelphia College of Art before enlisting in the Navy, where he was assigned to the USS Forrestal. Once discharged in 1957, Harry pursued a career in advertising in the “Mad Men” era, where he met his soulmate, Rita (Christy). Harry and Rita got married in 1959 and moved to Willingboro, NJ where they raised their three children. A true family man, he loved to take his family to the Jersey Shore each summer. This tradition continued, as Harry became a grandfather affectionately known as “Pop-Pop”. Everyone looked forward to the beach, the boardwalk, the rides and capping off the night with a Kohr’s ice cream cone. Harry was a connoisseur of the arts, always taking his family to the theater, movies and even a Frank Sinatra concert. He also loved watching television, especially the evening news and sporting events. Having spent his entire life in and around Philly, he was an avid fan of the Phillies and Eagles. Nothing brought him more joy in life than watching his teams win the World Series and Super Bowl. In retirement, Harry found much joy volunteering at Bancroft as an art teacher and continued his passion of painting and drawing. Harry left an extraordinary impression on everyone in his life, from his family and friends to his colleagues and his students. He will be greatly missed. He is survived by his children, Amy (Gregory) MacMichael, Lori (Richard) Osler, and Joseph Volpe, and his loving grandchildren, Stephen and Paul MacMichael, and Christy and Brendan Osler. His wife, Rita, predeceased him in 2012. In lieu of flowers, please consider donations to Samaritan Inpatient Hospice Center at Virtua Memorial, 5 Eves Drive, Marlton, NJ 08054

Henry (Harry) Volpe, 87, of Mount Laurel, NJ passed away peacefully in his sleep on the morning of Sunday, February 7th, 2021. Born and raised in Philadelphia, Harry attended the Philadelphia College of Art before enlisting in the Navy, where... View Obituary & Service Information

Send flowers to the Volpe family.