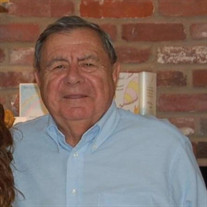 Herbert D. Thomas Obituary Herbert D. Thomas known to all as Herb, died on June 14, 2020 at Medford Leas at the age of 89. Born on December 24, 1930, Herb was the son of Herbert and Florence Thomas. Herb had a brother, Ronald, who died in his late teens. Herb’s death follows on the heels of the death of his dearly departed wife, Jean, of 64 years who passed on March 11. Herb was a cradle Episcopalian, baptized in February 1931 at Grace Church, Newark, NJ, which remained Herb’s parish until he relocated to Burlington County in the early 1990s. During those 64 years, he held many positions both in the parish and in the Diocese of Newark. A product of the public schools in Kearny, NJ, Herb received his bachelor’s degree from Hobart College in 1952; was drafted into the U.S. Army in 1953 and served in an anti-aircraft unit on the West Coast until discharged in 1955. Herb joined the Fidelity Union Trust Co. (a forerunner of Wells Fargo); rose to the position of Assistant Personnel Manager (before Human Services) and left in 1958 to join the staff of the General Theological Seminary as its first Secretary for Alumni Affairs. Over the course of his 35 years at GTS, Herb held many titles. He retired in 1993 as Vice President for Operations, which meant he was responsible for the physical plant which consisted of a New York City block of buildings and three adjacent apartment buildings. While at GTS Herb received a master’s degree from New York University in Higher Education Administration. In 1956, Herb married Jean Erskine and in 1959 Jean gave birth to their only child, Liz. In 1995, Herb and Jean moved from Nutley to Mount Laurel to be closer to Liz and their only grandchild, Kristen. Once settled in Mount Laurel, Herb and Jean joined Trinity Church Moorestown, where Herb was actively involved and served on several committees. He also served on numerous committees within the Diocese of New Jersey. He was an office volunteer at Trinity until recently and loved to tell Jean, he was “heading off to work!” The church played an enormous role in Herb’s life. He loved his time at General Seminary. The Thomas home in Nutley was always full of life, love and laughter and served as a suburban gathering place for students and young priests and their families who looked forward to a day in the suburbs, away from the hustle and bustle of New York City. Herb loved to garden, read, finish the New York Times crossword puzzle, and answer, correctly, the final Jeopardy question every night. He loved his small family immensely and unconditionally and eagerly awaited the daily call from his granddaughter, reporting on her news of the day. Herb, like Jean, couldn’t wait to pull into the driveway of Liz’s Avalon house where they would sit on the deck, enjoy the salt air and visit with neighbors who became family. Herb loved the title of “honorary grandparent” bestowed on him and Jean by Casey and Jordan. Herb is survived by his daughter, Liz Thomas, son-in-law, Jim Kehoe and granddaughter, Kristen Van Iderstine. In lieu of flowers, memorial contributions may be made to the Book of Remembrance, c/o Trinity Episcopal Church, 207 W. Main St., Moorestown, NJ 08057. Condolences may be left at www.lewisfuneralhomemoorestown.com

Herbert D. Thomas Obituary Herbert D. Thomas known to all as Herb, died on June 14, 2020 at Medford Leas at the age of 89. Born on December 24, 1930, Herb was the son of Herbert and Florence Thomas. Herb had a brother,... View Obituary & Service Information

The family of Herbert D Thomas created this Life Tributes page to make it easy to share your memories.

Send flowers to the Thomas family.