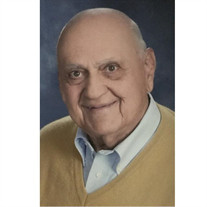 Jack Badie Sinunu was born a Palestinian Christian on March 25, 1924 in Jerusalem, Palestine , which was a British Mandate at the time. He attended the German Evangelical School in Jerusalem until World War II broke out and then transferred to St. George's, an English school. Jack graduated from the American University of Beirut in Lebanon in 1947 with a BA in Economics. He immigrated to the United States in early 1948 and worked as a salesman in New York City for his uncle's giftwares company. In 1952 he joined Campbell Soup Co. as a salesman in New York City and in 1954 was promoted and transferred to Campbell's headquarters in Camden, NJ. It was Jack’s background and knowledge of languages - he could speak four languages fluently - that made him a valuable asset to Campbell Soup and he spent the rest of his career as an executive in the International Division responsible for marketing Campbell products worldwide. In the process, he traveled extensively and visited 77 countries on six continents. He retired in 1990. Jack was a long time resident of Moorestown, NJ since 1954. He was an Elder in the First Presbyterian Church and a member of the Moorestown Field Club, where he was Chairman of the Golf Committee for a number of years. During his retirement he volunteered for the American Cancer Society, the American Red Cross, Virtua Memorial Hospital, and Tender Care. Jack was well-known for his wit and sense-of-humor. Always ready with a laugh, he had a joke or a rib-poke for everyone from his youngest grandchild to his oldest friend. His humor was most often met with laughs, sometimes an eye roll, but was always intended in good fun. Jack’s family was first and foremost in his life. From his immediate family to his large, extended family residing all over the world, Jack loved them all fiercely. He was the glue that held everyone together and nothing made him happier than when he was presiding over a family gathering with good food and a martini. Jack was a loving and devoted father to his four children: Nancy, Michael, Elizabeth, and Michele, providing many, many hours of lectures, suggestions, and analogies to help guide them in their lives. He would say his advice paid off with his children marrying lovely spouses which created even more opportunities and avenues to provide advice. Through these unions, nine grandchildren were added to the family who were the apples of their Grandpa’s eyes. Jack was blessed in life to be married to two special women who learned the way to his heart was through his stomach, learning to prepare many of Jack’s favorite Arabic meals. Jack was married to his first wife Jean for 17 years before she passed away from cancer. Jack met his second wife, Rumiko, while on a business trip to Japan and they recently celebrated their 45th wedding anniversary. Jack would often quote the poem, “Drinking From My Saucer,” reminding his children of how blessed he and his family were in life and how important he felt it was to give back to the world through charitable giving and volunteer work. Jack led by example throughout his life by giving generously to various charities, volunteering at the Church and hospitals, and being a good neighbor in word and deed. To the end Jack knew he was “drinking from [his] saucer cause [his] cup has overflowed.” Jack was predeceased by his first wife Jean Lerch Sinunu and his brother Alexander Sinunu. He is survived by his wife, Rumiko and his children Nancy Sinunu Kyle and her husband Donald Kyle, of Amelia Island, FL, Michael Sinunu and his wife Karen Sinunu, of Summit, NJ, Elizabeth Sinunu Kohm and her husband Shannon Kohm, of Fairfield, CT, and Michele Sinunu-Menzies and her husband Nicolas Menzies, of Jamaica Plain, MA. He is also survived by nine grandchildren, Jordan Kyle, Rory Kyle, James Kyle, Christopher Sinunu, Matthew Sinunu, James Kohm, Jackson Kohm, Simon Menzies, and Hazel Menzies. Due to social distancing guidelines, a memorial service will be held at a future date. In lieu of flowers, contributions can be made to the First Presbyterian Church of Moorestown,101 Bridgeboro Rd, Moorestown, NJ 08057 or Samaritan Healthcare and Hospice, 5 Eves Dr., Suite 300, Marlton, NJ 08053.

Jack Badie Sinunu was born a Palestinian Christian on March 25, 1924 in Jerusalem, Palestine , which was a British Mandate at the time. He attended the German Evangelical School in Jerusalem until World War II broke out and then transferred... View Obituary & Service Information

The family of Jack Badie Sinunu created this Life Tributes page to make it easy to share your memories.

Jack Badie Sinunu was born a Palestinian Christian on March 25,...

Send flowers to the Sinunu family.