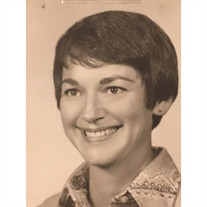 Jane Hollister Chew of Moorestown, N.J., died in Mt. Holly on Oct. 6th, 2020, a few days before her 84th birthday. She passed away peacefully, surrounded by her family. Beloved wife, mother, sister, and grandmother, Jane will be sorely missed by all who knew her. She is remembered for her unwavering loyalty to her family, to her beliefs, and to her country. Jane was born October 12th, 1936, in Fairfax, Va., the second daughter of Hector Hollister and Beulah Virginia, née Topley. She was a 1954 graduate of George Mason High School in Falls Church, Va., and also took courses at Madison College. On October 1st, 1960, she married D. Gary Chew, who was then serving in the U.S. Navy. As a Navy wife, Jane raised her family of three children in many different locations around the country San Diego, Cal.; Arlington, Virginia Beach, and Annandale, Va.; Groton, Conn.; Key West, Fla.; Honolulu, Hawaii; and Portsmouth, R.I., where the family remained for over 20 years. In 1992, she and her husband relocated to Moorestown. In addition to being a caring and meticulous homemaker, Jane worked at different times as a secretary, real estate agent, legal aide, and title company staffer. In addition to her husband of 60 years, she is survived by three children: David H. Chew and wife Julie of South Portland, Me.; Melanie D. Chew and husband Joseph R. Klett of Moorestown and Hopewell; and Stephanie Chew Melvin and husband James of Portsmouth; a sister, Melanie Boecklen and husband William of Auburn, Ala., and brother-in-law Donald Marsters of Clifton, Va.; six grandchildren: Amy Melvin MacTaggart and husband Philip of Millbrook, N.Y.; Steven Melvin of Portsmouth; Michael Melvin of St. Louis, Mo.; Joshua Chew of Moorestown; and Keile and Nathan Chew of South Portland; and stepgrandsons Alex and James Klett of Hopewell. She was preceded in death by her sister, Beverly Hollister Marsters. Services will be private, with inurnment at the U.S. Naval Academy Cemetery and Columbarium in Annapolis, Md. In lieu of flowers, memorial contributions may be made to the Wounded Warrior Project, P.O. Box 758516, Topeka, KS 66675-8516, https://support.woundedwarriorproject.org. Condolences may be shared at www.lewisfuneralhomemoorestown.com.

Jane Hollister Chew of Moorestown, N.J., died in Mt. Holly on Oct. 6th, 2020, a few days before her 84th birthday. She passed away peacefully, surrounded by her family. Beloved wife, mother, sister, and grandmother, Jane will be sorely missed... View Obituary & Service Information

The family of Jane H Chew created this Life Tributes page to make it easy to share your memories.

Send flowers to the Chew family.