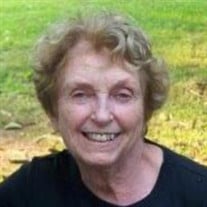 Jane Renee Titus Ackerson Cleaver, age 93, died Friday morning May 6th, 2022 at the Wiley Christian Retirement Community in Marlton, New Jersey. She was preceded in death by her husband, Robert E. Cleaver, on April. 19, 2015. They were married for 62 years. Born in Brooklyn, N.Y. in 1929, she was the daughter of the late Alfred H. and Edna Pope Ackerson. Jane grew up in Forty Fort, PA and was a graduate of the Wilkes-Barre Day School and Fairfax Hall of Waynesboro, VA. Prior to her retirement, she worked for Sears Roebucks for over 20 years. She was an active member in the Moorestown Monthly Meeting, working as the Meeting Secretary, Clerk of the Meeting and in various other capacities over the years. Surviving are her five children, David, New York, NY; Carol Stoneback (Wayne), Gainesville, VA; Richard (Deanna), Marlton, NJ; Steven, Richmond, IN; and Cathy Cleaver (David), Valencia, Spain. She was proud grandmother to six grandchildren: Kristen Wheeler, Erica Cleaver, Ashley Santos (Geovanny), Thomas Corrao, Emily Cleaver and Elizabeth Corrao and great grandmother to Ava and Kali Santos. She also had nine nieces and nephews who she loved dearly. She was preceded in death by her sister, Marilyn Barker in 1986 and Barbara Mason in 2009. Jane remained active her entire life. She loved music, especially country music, playing the piano and doing a variety of arts and crafts. She practiced yoga before it was widely popular and participated in community theater, which is where she and her husband first met. In her later years she particularly enjoyed painting and always looked forward to a friendly conversation. The family would like to thank the staff of the Wiley Community Retirement Community for their compassionate care. Her family knew that she was not only well cared for but well loved. The family will be gathering for a private service. A public memorial service will be held at a later date. In lieu of flowers, memorial contributions may be made to the Wiley Community Retirement Center, 99 East Main Street, Marlton NJ 08053. Payments may be made to https://payment.wileymission.org/

The family of Jane A Cleaver created this Life Tributes page to make it easy to share your memories.

Send flowers to the Cleaver family.