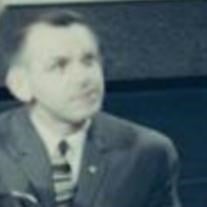 John Michael Govsky AKA Jack Sky July 18, 1921 – May 4, 2012 passed away peacefully. Jack was born in Philadelphia. In his later years he lived in Mount Laurel, New Jersey. Jack’s reputation as an audio engineer spanned across the United States. His education included electrical engineering at Drexel and radio communications at Yale. Jack’s technical and artistic achievements were far-reaching and extraordinary, whether he was maintaining communications in the South Pacific on the island of New Caledonia during World War II, or recording President Kennedy decades later in the “Fish Room” at the White House. Jack’s training as a classical violinist paved the way for his ability to calibrate recordings of the Kirov Ballet Orchestra and transfer them into US recordings without compromise to pitch or tempo. He showed his love by building and repairing things—like Hammond organs and baby grand pianos—and by sewing. After examining designer clothing in the store, he could whip up a knock off in no time flat! Who recorded all the NFL games before NFL Films existed? Yes, and who else would be found in the hospital by American Cinematographer magazine writing a computer algorithm that translated film into video, while recuperating from hip replacement surgery? Jack was inspired to do so, with empathy for the growing pains of film editors who were negotiating the challenging transition into the video industry. Jack’s creativity at times could be quite quirky, as he and his wife Florence in the ’50s manufactured novelty left-handed corkscrews in the form of billiard eight balls. The item was advertised in Esquire magazine and Dean Martin and Jerry Lewis ordered thousands with the decal “Dean and Jerry” for promotional purposes. Jack and his brother-in-law Nick Catucci also dabbled in the music business recording 45-rpm records in the family basement during infamous recording sessions on the weekends until three in the morning. It was around that time, too, when Jack trained Patti LaBelle’s first sound engineer, Harold B. Robinson, in the basement of his Ford showroom in Blue Bell, Pennsylvania. Jack’s music credits also include composing, along with his brother-in-law Nick Catucci and colleague Leon Rhodes, the Ballad of Diver Dan for a children’s adventure classic TV series in the ’60s. The show starred Frank Freda as Diver Dan and Suzanne Turner as Miss Minerva the mermaid, and a cast of fish marionette characters such as Baron Barracuda and his stooge sidekick Trigger Fish. The show played in several languages all over the world. Also prominent among Jack’s TV credits was the show produced by Berl Rotfeld Greatest Sports Legends. ESPN is now airing the reruns. Jack Sky’s film credits in the ’50s and ’60s while working for Kellman Productions encompassed those vintage “B” full length feature black and whites that were shot in Philly, including The Burglar starring Jayne Mansfield and Dan Duryea, as well as David and Lisa, an unusual love story nominated for two Academy Awards and starring Keir Dullea, about two young people with mental illness who helped each other heal. In 1966 Jack mixed the soundtrack for Discotheque Holiday, which featured 20 hit rock and roll songs -- those of Freddie Cannon, The Applejacks, The Chiffons, Freddie and the Dreamers, Jon Anderson (who later joined the band Yes), and several other artists. When Kellman retired Jack opened his own sound studio first in Philadelphia, and later in Cherry Hill, New Jersey. He recorded commercials highlighting celebrities such as Jimmy Durante, who threw his hat at the end of a take, saying “The sound man caught it,” as Jack effortlessly lifted one hand from the controls to catch Jimmy’s hat without losing the take. Jack mixed the soundtracks of films of African folklore and anthropology from Temple University and the University of Pennsylvania. On location at Lankenau Hospital he recorded the first film on open-heart surgery. Jack also mixed the sound on industrial films that featured, for example, Ingersoll Rand’s devices, which proved to save the lives of those in mining accidents, and rescued children who had fallen into wells. He recorded classified films for RCA, NASA, and the Department of Defense, and participated in capital cases across the country as an expert witness. It was also during that period when Jack recorded Ed McMahon’s audition tape for Johnny Carson’s Tonight Show. As Jack tells the story, “Ed was looking for a morning show sponsoring men’s cologne, and he ends up selling beer and dog food!” One of Jack’s proudest mementos is his candid photograph with President Kennedy taken by the cameraman that was on location at the White House in the context of a contract with the Steel Workers Union. David J. McDonald, Steel Workers Union President, was seated to the left of the President as Jack crouched between them and said, “Mr. President, please be careful not to drag your sleeve across the microphone I’ve just taped to the side of your chair. It would make noise in the track.” So it is, that on that day Jack Sky gave President Kennedy his instructions. On a personal note, Jack was thoughtful and caring. When still healthy he was quietly escorting friends to and from doctor’s appointments. He provided nursing care for his wife Florence before hospice existed, and for his son-in-law Tony, who both predeceased him. We extend our deep thanks to the dedicated staff of Genesis Healthcare as well as Lighthouse Hospice. Jack will be sadly missed by family and friends, especially his children Loretta, John, Mark, and daughter-in-law Edie. A viewing will be held from 9:00 – 10:00 am followed by a funeral at Trinity Episcopal Church (207 West Main Street, Moorestown, New Jersey) on Wednesday May 9, 2012 at . There is no public interment. Memorial donations may be made to the Alzheimer’s Foundation of America

John Michael Govsky AKA Jack Sky July 18, 1921 – May 4, 2012 passed away peacefully. Jack was born in Philadelphia. In his later years he lived in Mount Laurel, New Jersey. Jack’s reputation as an audio engineer spanned across the United... View Obituary & Service Information

The family of John Michael Govsky created this Life Tributes page to make it easy to share your memories.

Send flowers to the Govsky family.