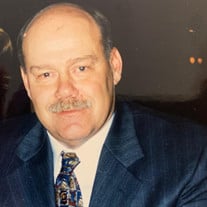 John (Jack) R. Hendrickson of Moorestown, NJ passed away peacefully on May 1, 2020 surrounded by his family at the age of 78. He was born on December 4, 1941 and raised in Newark, NJ by his mother Hazel (Tomlin) Hendrickson. He had seven siblings, June (Bill) Pekrol, Robert Hendrickson, Ann (Ed) Samples, Joyce (Larry) Cooke, Donald (Beverly) Hendrickson, Karen Hendrickson, and Judy (Pete) Kost and is survived by Joyce, Karen and Judy. Jack proudly served as a U.S. Marine from 1960-1966 and received the Good Conduct Medal and the Rifle Sharpshooter Badge. He then became a New Jersey State Trooper, which was Jack’s greatest service and dream job. He retired as a Detective Sergeant First Class in 1988. He began his second career with Cox Enterprises, Inc. where he moved up the ranks first at the National Auto Dealers Exchange as an arbitrator and assistant general manager. He moved to corporate in 2002 as a regional security manager for the Northeast Territory and Canada. Jack was known for his quick wit and sense of humor. An avid golfer, he was a fixture on the local courses and attended many charity outings. Jack was passionate about the New York Yankees and Giants, books and crossword puzzles and reading in the evenings. He was a member of the Marine Corps Association, Knights of Columbus and the American Slovak Citizens Club of Roebling, NJ and of the was a member of the NJ Former Trooper Association and the State Troopers NCO Association of NJ. A devoted partner, father and grandfather, Jack will be sadly missed by his family, including his lifelong companion, Holly Reinson, his son Kurt (Jennifer) Hendrickson, daughter Kristen Hendrickson, stepdaughter Katie (Brendan) Orr, stepson Andrew (Ellie) Orr and his beloved grandchildren, Brittany, Jill, Sarah, Kristina, Christopher, Alexander and Jaxson, who were the light of his life. Memorial mass 10:30 am Friday APRIL 30Th, 2021 at Our Lady of Good Counsel Church, 42 W. Main St., Moorestown, NJ. 08057. Private Interment Brigadier General William C. Doyle Veterans Memorial Cemetery. In lieu of flowers. Memorial contributions may be made to the NJ Former Trooper Association. http://www.njftheritagefoundation.org/donate/donate.php Condolences may be left at www.lewisfuneralhomemoorestown.com

John (Jack) R. Hendrickson of Moorestown, NJ passed away peacefully on May 1, 2020 surrounded by his family at the age of 78. He was born on December 4, 1941 and raised in Newark, NJ by his mother Hazel (Tomlin) Hendrickson. He had seven... View Obituary & Service Information

The family of John R Hendrickson created this Life Tributes page to make it easy to share your memories.

Send flowers to the Hendrickson family.