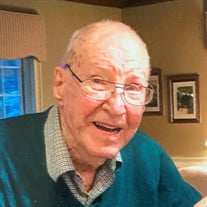 John Harold McKeon, Sr. Jack McKeon passed away after a long illness on March 22, 2019 at Medford Leas in Medford, NJ. He was born in 1923 and grew up on Long Island in New York. He was the second son of Robert G. McKeon and Gladys Totten McKeon. Jack was a 1941 graduate of St. Paul’s School in Garden City, NY. Just as he enrolled at Amherst College, World War II intervened. Jack left Amherst and attended the New York State Maritime Academy. From there, he served in the Navy as deck officer and small boat commander on an attack transport in the Pacific theatre. After the war, Jack returned to Amherst and graduated in 1949. He excelled in sports and played varsity baseball, football, and basketball. He was a running back in football and played centerfield and batted at the top of the order in baseball. While at Amherst, he met Joan Rogers of Moorestown. They married in 1948 and remained married for almost 71 years. Jack was devoted to “Rog” as he often called her. He visibly lit up when she came in the room, even as he became infirm. After Amherst, Jack spent 15 years at a family business, McKeon Lumber Company, on Long Island. He left to become an educator in Cherry Hill Public Schools and at Moorestown Friends School, retiring as Cherry Hill’s Superintendent of Schools. There, he faced the challenge of a period of declining enrollment and the need to close several schools. Joan and Jack raised four children in Moorestown: the late John McKeon, Jr., Lucy McKeon, Amy McKeon Wallace, and Tom McKeon. He was a devoted father, spending countless hours as a steady pitcher or quarterback during neighborhood ball games, and taking the kids skiing, swimming, and on family vacations, including a five-week trek across the country in a station wagon with a camper in tow. (One adult, four kids from 7 to 17 years old, and no videos). He loved keeping track of all the local kids as they grew older, following their education, work, and growing families. He was a great support to his children as they became adults. After retirement, he volunteered his time for a variety of organizations and worked on his golf game. He spent winters in Florida at the Moorings in Vero Beach. Joan and Jack have lived at Medford Leas since 2002. Jack is survived by his wife, Joan Rogers McKeon of Medford Leas; Lucy McKeon and Brad Armstrong of Cornwall, VT and their children Kai Armstrong and Claire Armstrong; Amy McKeon Wallace and Scott Wallace, and their sons James Wallace, Daniel Wallace; Tom McKeon and Mary Whited of Falmouth Maine and their daughters Margaret McKeon and Caroline McKeon. He leaves a great grandson, Charles Wallace. Donations in Jack’s memory may be made to the John H. McKeon Jr. Scholarship Fund at Moorestown Friends School at 110 East Main Street, Moorestown, NJ 08057. A memorial will be held at Medford Leas in the Holly Room next Monday, April 1st at 11 am.

John Harold McKeon, Sr. Jack McKeon passed away after a long illness on March 22, 2019 at Medford Leas in Medford, NJ. He was born in 1923 and grew up on Long Island in New York. He was the second son of Robert G.... View Obituary & Service Information

The family of John H McKeon created this Life Tributes page to make it easy to share your memories.

Jack McKeon passed away after a long...

Send flowers to the McKeon family.