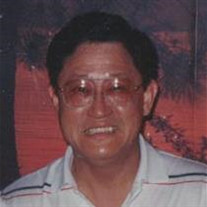 Kee Hyung Lee of Moorestown, NJ, died peacefully on August 21, 2016 at Care One in Moorestown. Born in Seoul, Korea, second son of the late Byung Hee Lee and Seung Tek Cho. He was predeceased by his older brother, Sam Hyung Lee. Kee deferred his admission to Seoul National University to join the Korean Army in 1950 at the start of the Korean War. He rose to the rank of Major and served 9 years. Kee met his first wife, Young Shik (Esta) Chung shortly after the Korean war ended. They were married on June 28, 1955 and had a son, Choong Mu Lee. During this time, Kee took his first trip to the US and attended Anderson College in Anderson, IN for one year. He returned to Korea to finish his undergraduate degree at Seoul National University. In 1958, Kee immigrated to New York and took his first job with Belco Petroleum. Esta followed in 1960, and Choong Mu (then known as John) arrived in 1961. Kee was attending Columbia University, pursuing his masters degree in international relations when his daughter Jacqueline Shin Mu Lee was born. The following years were spent with Gulf Oil Company, moving to many cities and places, gathering life-long friends along the way. The family lived in Philadelphia and Pittsburgh before being transferred to Seoul for 2.5 years, then returning to the US in 1971. Homes included Santa Monica, Pleasanton and Woodland Hills, CA, then Tulsa, OK, Scarsdale, NY and Houston, TX until Esta passed away in 1988. After moving to NJ, Kee met his second wife, the late Dr. Heeyul (Helen) Cho and they settled in Moorestown, NJ after getting married on December 15, 1990. Kee retired from Chevron Corporation in 1992. He enjoyed traveling with Helen, visiting Korea and Japan often, and they also enjoyed traveling to other countries and cruising together. Kee is survived by his younger brother Oh Hyung Lee and his wife Sook Hee Moon of Seoul, Korea, son Choong Mu Lee of Pittsfield, MA, daughter Jacqueline Lee de la Houssaye and granddaughters Maxine de la Houssaye and Madeleine de la Houssaye, of Tempe, AZ. Visitation will be at 10:00 am on September 6, 2016 at the Lewis Funeral Home, 78 E. Main St. Moorestown, NJ. with the memorial service at 10:30 am and a lunch reception to follow at another location. Private interment at George Washington Memorial Park, Paramus, NJ. The family asks for donations to the American Cancer Society or the American Heart Association in lieu of flowers. Please use the following email address [email protected] to RSVP to the lunch reception. Directions will be provided at the service, or contact this email for directions.

The family of Kee Hyung Lee created this Life Tributes page to make it easy to share your memories.

Send flowers to the Lee family.