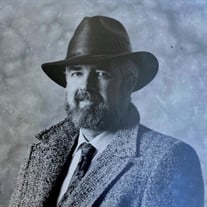 Lloyd P. Harris, May 03, 1944-September 23, 2021, passed away at age 77 at Samaritan Hospice with his family by his side. Lloyd was born in Ayer, MA to Alan Wheeler Harris and Minnie Shew Harris. They were a military family and Lloyd grew up in various parts of the world--Germany, Panama, the US. In high school in Orleans, France, he and friends spent their summer touring the Loire Valley on motorbikes. As a teen, he attained the rank of Eagle Scout. Lloyd earned a BA in Art/ Architecture from Rutgers College and an MFA in Scenic Design from Mason Gross School of the Arts, also at Rutgers University. He designed shows for Off-Broadway, summer stock, and academic theaters as well as for Moorestown Theater Company. Lloyd owned Silverline Design which created original furniture and sculpture, one of which is in the collection of Rutgers University’s Zimmerli Art Gallery. In addition, he was employed in the architectural woodworking and commercial exhibit industries. He taught architectural design software programs to students at Pratt Institute in New York. Lloyd’s love of teaching took him to Union County Magnet High School for Science, Math, and Technology in Scotch Plains, NJ as a founding faculty member. There he spent 15 years bringing a uniquely creative approach to tech education. In the school’s organizational year, Lloyd made an indelible impression on new students: He taught them the inner workings of computers by having them personally act out how information flows through the machines. Lloyd loved being in the natural world where he hiked, kayaked, and camped. He especially cherished family trips to the American West and Alaska. After retirement in 2011 he and his wife moved to the Dudley family home in Moorestown. He was the husband of Sara Dudley Harris, the father of Elliot D, Harris (Lynn A. Harris), and Lindsay J. Harris (Brandon S. Campbell); the grandfather of Gabriel, Noah, Heron, and Hayden; the brother of Jerome M. Harris (Laurie R. Harris) and the late Alan W. Harris Jr. He is also survived by a niece, nephews, and a grandniece and grandnephews. A memorial service will be scheduled later. In lieu of flowers, memorial contributions may be made to South Camden Theater Company, The Waterfront South Theater, 400 Jasper St, Camden, NJ 08104. www.southcamdentheatre.org/donate.

Lloyd P. Harris, May 03, 1944-September 23, 2021, passed away at age 77 at Samaritan Hospice with his family by his side. Lloyd was born in Ayer, MA to Alan Wheeler Harris and Minnie Shew Harris. They were a military family and Lloyd grew up... View Obituary & Service Information