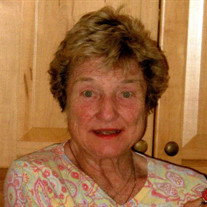 Webster, Margaret (nee McFate ) died in her sleep, aged 83, at home in Medford NJ on June 8,2015 two weeks before what would have been her 64th wedding anniversary. Hallmarks of her life were her long and happy marriage, her devotion to her family and friends, and her love of reading and writing. She was born in Chicago on January 21,1932, the daughter of a hotel man, Jim McFate, and his wife Beth. She grew up living in the College Arms Hotel in DeLand FL and later in The Wayne (PA) Hotel. As a student at the Shipley School in Bryn Mawr, she was set up on a blind date with her future husband, Richard Webster, by Dick's sister Kate. Marcy and Dick tried to elope when Marcy graduated from Shipley, but were persuaded to wait a year. Marcy attended Vassar College for a semester, but missed Dick so much that she transferred to Bryn Mawr College, to be closer to him -- he had dropped out of Amherst College and enlisted in the Navy, and was at Lakehurst Naval Air Station. They were married June 21, 1951 at The Wayne Presbyterian Church. Marcy was a wonderful mother to their four children and later joined the teaching staff of the Preschool Program at the Moorestown Presbyterian Church. She was a volunteer telephone counselor for the CONTACT program for many years, and also served as an Elder on the Sessions of both the Moorestown and later the Haddonfield Presbyterian Churches. A lifelong avid reader, story teller and writer, Marcy returned to Bryn Mawr College as a McBride Scholar, and also attended the Rutgers University (Camden) Writing Program. She wrote pieces published in the New York Times, The Philadelphia Inquirer and for a time had a regular column in the Camden Courier Post. After moving to the Medford Leas Continuing Care Retirement community she enjoyed helping to edit and write for its publication, Medford Leas Life. Marcy loved traveling with her husband. New York City had a special place in their hearts as it reminded them of their newlywed days living in Brooklyn. After Dick's retirement in 2000, they enjoyed traveling across the U.S.A., to the British Isles and Europe. She planned her summer every year around attending a Labor Day auction in New England. She collected antiques, china and spoons, and never tired of rearranging her furniture. For years she enjoyed playing tennis at the Moorestown Field Club. She was always up for a bridge or Scrabble game, and faithfully worked on the Sunday New York Times crossword puzzle. A devoted wife, mother and grandmother, she will be deeply missed by her husband, A. Richard Webster, and their four children, Elizabeth Stouffer (Christopher) of Philadelphia, Ann Tucker (Robert) of Elkins, NH, James (Elizabeth) of Jaffrey, NH and Richard of Riverside, NJ, and grandchildren Richard Stouffer, William Stouffer, Rowan Webster (Janet), Ann Stouffer, Hannah Webster, Jefferson Tucker and Katherine Tucker. She is also survived by her sister Elizabeth Haas (Mel) of Silver Spring MD and her cousin Judy Homan (Jack) of Woolwich NJ, nieces, nephews and a host of friends. Her memorial service will be held on Saturday, June 13 at The Haddonfield Presbyterian Church, 20 Kings Highway East Haddonfield, NJ 08033 the family will receive at 10 a.m. with the service to follow at 11 a.m. In lieu of flowers, memorial donations to the church are requested.

Webster, Margaret (nee McFate ) died in her sleep, aged 83, at home in Medford NJ on June 8,2015 two weeks before what would have been her 64th wedding anniversary. Hallmarks of her life were her long and happy marriage, her devotion to her... View Obituary & Service Information

The family of Margaret Webster created this Life Tributes page to make it easy to share your memories.

Send flowers to the Webster family.