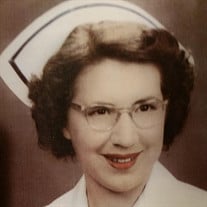 Marian Bell Weinberger Hartman passed away peacefully in her sleep on December 26, 2017 at Medford Leas. She was born July 27, 1920 in Dobbes Ferry, NY to William Weinberger and Ingeborg Carlson Weinberger of New Haven, CT. Marian graduated from Northfield Seminary in 1938 and earned a degree in sociology from Bucknell University in 1942. She went on to pursue two master's degrees, one in nursing from Yale University and one in education from Columbia University. She met her husband Neil H. Hartman at a Quaker workcamp in Michigan in 1940. Marian worked as a nurse at the Children's Hospital of Pennsylvania and at Yale New Haven Hospital. She taught pediatrics at Grace New Haven School of Nursing. Neil and Marian were married on August 19, 1978 in Hamdon, CT at the Unitarian Universalist church. Together, they traveled the world, participated in 19 Elderhostels in the US and Europe, and went camping in all 50 US states. They were active members of Moorestown Monthly Meeting of the Religious Society of Friends where Marian served as the Meeting secretary. She also served on the board of Greenleaf Friends Retirement Community in Moorestown, NJ. She continued using her nursing skills working for a local pediatrician and volunteering with the Red Cross. Marian is survived by her husband, Neil H. Hartman, step-daughters Sandra M. Hartman Reid and Judith A. Hartman, son-in-laws Joseph M. Reid and Michael L. DeKay, and grandchildren Kimberly L. Reid, Jamie Lynn E. Reid, McKenzie D. Hartman, and Addison D. Hartman. A memorial service celebrating the life of Marian Bell Weinberger Hartman will be held on Saturday, January 20, 2018 at 2:00pm at Medford Leas in Medford, NJ. In lieu of flowers, please send contributions to Moorestown Monthly Meeting of the Religious Society of Friends. Moorestown Monthly Meeting,118 E. Main St., Moorestown, NJ 08057. (865) 235-1561 http://mmm1802.org/

The family of Marian Weinberger Hartman created this Life Tributes page to make it easy to share your memories.

Marian Bell Weinberger Hartman passed away peacefully in her...

Send flowers to the Hartman family.