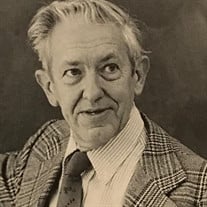 Neil Harmon Hartman passed away on February 6th, 2018, in Medford, New Jersey, at the Medford Leas Retirement Community, he was 97. In addition to being a caring father and grandfather, Neil will be remembered as a dedicated teacher who impacted... View Obituary & Service Information

The family of Neil H Hartman created this Life Tributes page to make it easy to share your memories.

Send flowers to the Hartman family.