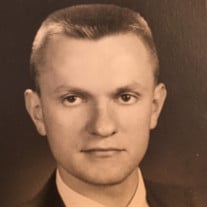 Whitney, Paul Warren of Moorestown, NJ. Born Jan. 4, 1928 passed away peacefully on April 11, 2017 at the Samaritan Hospice Unit in Mt. Holly, NJ at the age of 89. One of 5 brothers, he was raised in Camden, NJ where his father Rev. Augustus Dodge Whitney, Sr. was a minister of the First Presbyterian Church of Camden. His mother, Anne Warren Whitney taught French, English and Spanish at Hatch Jr. High School in Camden. After moving to Moorestown, she continued to teach at the Moorestown Jr. & Senior High schools. Paul was a veteran of the U.S. Navy and attended the University of Pennsylvania, his mother’s alma matter, under the GI bill. He graduated witth a BA in Literature and went on to earn his PhD from the University of Maryland. He taught at Albright College in Reading, Pa. and eventually settled his family in Moorestown, teaching at Rutgers in Camden and Rosemont College. Father of Lynn Carol Whitney of Moorestown and Delanco, Paul Dodge Whitney of Moorestown and Marlton. Brother of John (Helen) Whitney of Moorestown and Mark (Irmgard) of Stony Brook, NY. And the late Augustus Dodge Whitney, III and Lt. Col. Richard Keller Whitney. Grandfather of Graham Whitney Goldman and his wife Megan of Brooklyn, NY. Paul will be remembered fondly by his many Nieces and Nephews, great Nieces and Nephews. Services and interment will be private. Paul was a lifelong educator ,learner and lover of literature and the arts. In lieu of flowers contributions may be made to PBS or the National Endowment of the Arts National Endowment for the Arts, 400 7th Street, SW Washington, DC 20506-0001.

Whitney, Paul Warren of Moorestown, NJ. Born Jan. 4, 1928 passed away peacefully on April 11, 2017 at the Samaritan Hospice Unit in Mt. Holly, NJ at the age of 89. One of 5 brothers, he was raised in Camden, NJ where his... View Obituary & Service Information

The family of Paul Warren Whitney created this Life Tributes page to make it easy to share your memories.

Send flowers to the Whitney family.