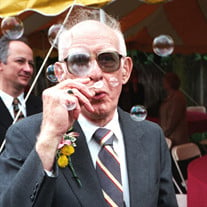 Peter Forrest MacGhee Sr., a lifelong resident of Moorestown, New Jersey, was born at Cooper Hospital in Camden County in 1925. He resided in at least three houses in Moorestown, including 137 East Oak, the Hessian House on Main Street, and his house on East Main Street where he lived for the last 56 years. His father, James Forrest MacGhee, was a chemical engineer and geologist who came from the mountain region of North Carolina called Cataloochee. Peter’s mother, Betsy Simmonds MacGhee, was descended from the Schiff family of Asheville, North Carolina. During World War II, Peter convinced his Mother to sign him into the US Navy when he was 17. His original orders were for Guadalcanal, but those orders were lost. He ended up a Navy Corpsman, Dental technician, serving at Norfolk Air Station in Virginia and at the Naval Hospital at Bainbridge Maryland. After World War II, he went to Gettysburg College where he majored in Political Science. He drove to Gettysburg in his first and perhaps favorite car, a Ford Model A. There he met his future wife, Marian Page Harbaugh, who was his Spanish teacher. After graduation, Peter worked in a bank as a teller and then he made a career as a salesman, working for several companies over the years: Addressograph Multigraph (addressing machines used in credit card transactions); the Ditto Division of Bell and Howell selling Spirit Duplicators (the purple printed papers students often inhaled fumes from); selling floor cleaning supplies from American Lincoln; and selling Insurance Policies. An inveterate mechanic, Peter also held a position repairing credit card manufacturing machines. He ended his varied career reading water meters for The Township of Moorestown. A natural photographer, Peter documented family vacations, weather events and other ephemera, all without benefit of a light meter, on Kodak slide film. In his travels as a salesman, he enthusiastically perused thrift stores, finding vintage cameras and other great items. At home, he enjoyed refinishing furniture, gardening with his wife, and repairing broken objects. Peter liked "talking to people", he was a story teller, a voice of reason, a consoling person and a moderating force. He was a great father to his sons Peter and William. On January 8, 2020 at the age of 94, after a brief hospitalization, he succumbed to the effects of age. He was preceded in death by his wife of 61 years, Marian MacGhee, in 2013; infant daughter Anne; as well as his siblings David, James and Nancy Conrow. He is survived by his son, Peter Forrest MacGhee Jr. and his wife Kathleen, grandchildren Courtney Sullivan and her husband Ryan, great-grandchildren Kayla and Natalie; Sean MacGhee and his wife Sarah, great-grandchildren Ella and Emily; Lindsey MacGhee; second son William Page MacGhee and his wife Elizabeth Chaney, and grandchild Sarah MacGhee. Funeral service Sat. Jan. 11th 1 pm at the Lewis Funeral Home, 78 E. Main St, Moorestown, NJ.Visitation 12:30 to 1 PM. Interment Trinity Episcopal Cemetery, Moorestown, NJ.

Peter Forrest MacGhee Sr., a lifelong resident of Moorestown, New Jersey, was born at Cooper Hospital in Camden County in 1925. He resided in at least three houses in Moorestown, including 137 East Oak, the Hessian House on Main Street, and... View Obituary & Service Information

The family of Peter F MacGhee Sr created this Life Tributes page to make it easy to share your memories.

Send flowers to the MacGhee family.