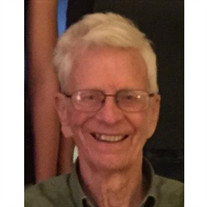 Philip James Flanders January 2, 1927-January 21, 2021 Philip James Flanders passed away peacefully at home on January 21, 2021. Philip was fortunate to stay at home with Kwadjo, his caregiver of the last 4 years. Phil received regular visits from his oldest son, Jonathan Flanders, and family and daughter, Melissa Flanders. Philip James Flanders was the oldest of three children born to Robert Charles Flanders and Anna Kendall Homrighausen in Denver, Colorado. He spent the first two years of his life in Denver where his father ran a Home for Boys. When Phil was 2, his father moved the family to a suburb of Philadelphia. During Phil’s childhood, the family would drive to New Hampshire and spend summertime in the Sanbornville area by Great East Lake. The Flanders had extended family in the New Hampshire area. During the school year, Phil would work most Saturday mornings on a nearby farm to earn 10 cents, the cost of going to the movies in the 1930s to see the latest Hollywood stars. During high school, Phil worked as camp counselor at one of many New Hampshire area camps for kids. He would often hitchhike in the summers to New Hampshire. Many a time, he brought his younger brother, Bobby, along for the trip. In Phil’s senior year of High School, he enlisted in the U.S. Army. Following WWII, Phil attended William and Mary College with the support of the GI Bill. After one year, he transferred to Haverford College. He completed a Bachelors and Masters’ Degrees in Physics from Haverford. Phil met his future wife Nancy Derlin through a mutual friend. They were married in Moorestown, New Jersey in June of 1953. Nancy and Phil had 6 children. With Phil’s full time job, 6 children and various hobbies, he had a full and rich life. Phil worked in physics and started his career at the Franklin Institute in Philadelphia. In 1964 he accepted a job with Mullards in England and the family spent the year abroad. Phil and Nancy made such deep friendships while in England that they made annual trips there for the next 40+ years. After Mullards, Phil accepted a job at the University of Pennsylvania Physics Lab. He worked there until retirement. He would take the bus from Moorestown to the center of Philadelphia and walk 2 miles to the University of Pennsylvania. He always enjoyed walks. When he was not at the lab, Phil always seems to be working on home and car repairs, or various artistic endeavors. He printed the 100 plus annual Christmas cards from a linoleum block design he carved, printed silk screen cards, and painted the family home numerous times. He researched, wrote, and published 8 non-fiction books about the history of Moorestown, Trinity Church, residents of Moorestown and family genealogy. Phil seemed to enjoy each era of his life and enjoyed the company of those around him. We will miss his kind heart and generous soul. Phil was predeceased by his wife - Nancy, sister - Charlotte Raffensberger, and daughter - Charlotte Carver. He is survived by his younger brother - Robert Flanders (wife PJ) and children: Adrienne Flanders (husband Jerry Friedman), Stephanie Sun (Husband Eugene), Melissa Flanders, Jonathan Flanders (wife Carolyn) and Ian Flanders (Partner Tony Puseteri). He is also survived by 9 grandchildren: Rachel Friedman, Lisa Friedman (husband Matt), Caitlin Hoogland (husband Dustin), Jenna Flanders, Jasmine Flanders, Stephanie A. Sun, Elizabeth Sun, Thomas Sun, and Natasha Sun. In addition, he is survived by 3 great grandchildren: Mason Hoogland, Jax Hoogland and Lexi Hoogland. Due to the present Covid restrictions no services will be held at this time. In lieu of flowers. Memorial contributions may be made to the Book of Remembrance, c/o Trinity Episcopal Church, 207 W. Main St. Moorestown, NJ 08057

Send flowers to the Flanders family.