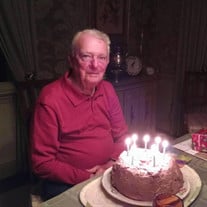 Ralph F. Gildehaus, Jr. died on Oct. 27, 2020, at his home in Moorestown at the age of 91. Resident of Moorestown since 1973, Ralph almost made it to his 92nd birthday on November 5. Born into a large extended German American family in South Saint Louis, Ralph graduated from the John Burroughs School in 1947, where he was involved in theatre, a literary publication, and the tennis team. He held an interesting array of part-time and summer jobs--working at a drugstore soda fountain, driving range, and movie theatre, among others--which contributed to his engaging personality and sales skills that he would use in his later life and career. Ralph and several of his Burroughs classmates, including his best friend Ferg Fowler, attended Amherst College--sight unseen--from which Ralph graduated with a B.A. in Chemistry in 1951. He served for two years with the U.S. Army Chemical Corps, stationed for his final six months protecting an airbase outside of London, England during the time of the Korean Conflict and Cold War tensions. After a period in the Army Reserve, he was honorably discharged as a Captain. In 1953, Ralph started in sales with Union Carbide for which he would work for nearly 40 years. His training program took him to New York City, Charlotte, and then Philadelphia, where he met Betty Jane Davis--who would become the love of his life and spouse for 60 years--at a young adult group sponsored by the Bryn Mawr Presbyterian Church. They married in that same church in 1960, moved to Tulsa, and began a family with two children, Ralph and Charles. Ralph’s work took the family to Chicago, St. Louis, and finally Moorestown, where Ralph and Betsy have lived in the same house since 1973. They are long-time members of the First Presbyterian Church of Moorestown, where Ralph has served as an Elder, Deacon, and Trustee. Ralph was a member of the Moorestown Field Club and the New Jersey Society of Pennsylvania (serving a term as its president). For several years, he raised funds for the United Way of Burlington County. Ralph lived with a great sense of humor and relentless optimism. He was a character. One of his Army Reserve buddies said that Ralph was the funniest person he had ever met. Ralph loved entertaining people in his very decorated basement. He would play his “boomba” instrument for anyone who would dare to listen and particularly liked animated covers of a variety of songs. He was incredibly handy--creating and repairing bird houses for his and other yards and making lamps out of what other people might consider junk, including one out of an old Christmas tree trunk. He was a talented gardener--indoors and out (talking with the plants was his secret). His next-door neighbor said a few years ago that Ralph had slowed down somewhat, but still did twice as much yard work at twice the age. After retiring from Union Carbide more than 25 years ago, Ralph and Betsy have enjoyed traveling all over the world, staying in Siesta Key FL for a few weeks most years, and visiting with their children, daughter-in-law, and grandchildren. Two years ago, they took their last cruise to celebrate his 90th birthday. Last year, they attended the graduations of their grandson from UNC and granddaughter from high school, which turned out to be their last trips together. He enjoyed being a husband, father, and grandfather. As his granddaughter said, “Papa clearly loved us and supported us. I will always take that with me.” Ralph loved his family, neighbors, friends, church, alma maters, and Moorestown community, for which the entire family is grateful for love and support over many years. He is survived by his wife of 60 years, Betsy (nee Davis); his children Ralph F. Gildehaus III, and his wife Jan, and Charles Gildehaus; and his grandchildren George Gildehaus and Diane Gildehaus. Interment and memorial services will be private. In lieu of flowers, memorial contributions may be made to the First Presbyterian Church of Moorestown, September 12th Fund, 101 Bridgeboro Road, Moorestown NJ 08057. Please consider participating in the memorial service at 11 am on Tuesday, November 3, virtually through one of the following links: https://www.fpcmoorestown.org/worship/live-stream/

Ralph F. Gildehaus, Jr. died on Oct. 27, 2020, at his home in Moorestown at the age of 91. Resident of Moorestown since 1973, Ralph almost made it to his 92nd birthday on November 5. Born into a large extended German American family in South... View Obituary & Service Information

Send flowers to the Gildehaus family.