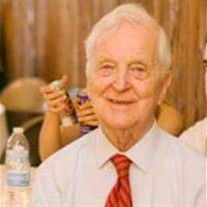 Dr. Ralph J. Pschunder of Moorestown passed away on Saturday, October 7, 2017 at Samaritan Hospice in Mt. Holly, NJ. He was 97.3, as the engineer in him would say. He was born in Marburg-an-der-Drau (then in Austria-Hungary; today Maribor in Slovenia) to American Minnie (Klingbeil) Pschunder and her Austrian husband, Josef Pschunder, on June 20, 1920. Rudi grew up in Ferguson, MO, USA, and Vienna, Austria, and was caught on the wrong side of the Atlantic by the Great Depression and the Nazi Anschluss of Austria in 1938, the year he graduated high school and entered the University of Vienna. He got his first degree in mechanical engineering in 1941, and eventually received his doctorate there in 1965. Rudi married Hilda O. Weiler of Vienna in October 1943, and they were married for 69 years until her death in March 2013. Drafted into the signals troops of the Wehrmacht in November 1943, he survived WWII and was a POW on a farm in France until late 1947, where his fluency in German, English and French was very useful. He returned to Austria to become a professor at the TGM in Vienna, until he was able to emigrate to the USA in 1954 and move his family to Watertown, NY. Ralph worked first at the NY Air Brake where he received 4 US patents, and then moved to Moorestown, NJ, in 1959 to work at RCA for 28 years where he specialized in computer-aided analysis of structures. He helped design and evaluate the structural integrity of both the giant BMEWS “Golf Ball” radome and its successor the CSEDS “Cornfield Cruiser” in Moorestown, the Mt. Sutro tower in San Franciso (for which he shared RCA’s highest technical award, the David Sarnoff Medal in 1974), the antenna on top of the north tower of the World Trade Center in NYC which was destroyed on September 11, 2001, the small Lunar Rover dish antennas which sent pictures of the astronauts from the Moon directly back to the Earth, and parts of the US Navy’s AEGIS cruisers and destroyers. Ralph was named RCA Moorestown’s “Engineer of the Year” in 1979 for his development of DYNA, a finite-element structural analysis computer program, and retired in 1987. He served as a Boy Scout adult leader for Troop 40 in Moorestown, enjoyed traveling & photographing the world and vacationing in Stone Harbor with his family, and was proficient in many sports, including mountain climbing, sailing, skiing and volleyball. He was a kind and generous role-model for his children and grandchildren, and those who knew him. Ralph is survived by his three sons, Harald (Barbara), Herbert, and Wilfred (Tess), his daughter Heidi (Glenn) Eckenhoff, grandchildren Amanda, Samantha, Rachel, Alison, Emily, Nicholas, Brian (Tasha), Kevin, Justin, Lauren, Colin., great-grandchildren Daisy, Dahlia, Liam. Also survived by his Step- Grandchild Jacob (Briana) and their children Charlotte and Deegan and a sister-in-law and three nephews in Austria, Eva, Udo, Volkmar and Burkhard Weiler. Relatives and friends of the family are cordially invited to Ralph’s viewing at the Lewis Funeral Home, 78 East Main St., Moorestown, NJ, on Friday, October 13th from 6 to 8 PM. Funeral services 9 am Saturday October 14, 2017 at Fellowship Alliance Chapel, 199 Church Road, Medford, NJ. Interment will be private at Colestown Cemetery in Cherry Hill. In lieu of flowers memorial contributions to Samaritan Hospice, 5 Eves Drive, Suite 300, Marlton, NJ 08053.

Dr. Ralph J. Pschunder of Moorestown passed away on Saturday, October 7, 2017 at Samaritan Hospice in Mt. Holly, NJ. He was 97.3, as the engineer in him would say. He was born in Marburg-an-der-Drau (then in Austria-Hungary; today Maribor... View Obituary & Service Information

The family of Ralph J Pschunder created this Life Tributes page to make it easy to share your memories.

Dr. Ralph J. Pschunder of Moorestown passed away on Saturday,...

Send flowers to the Pschunder family.